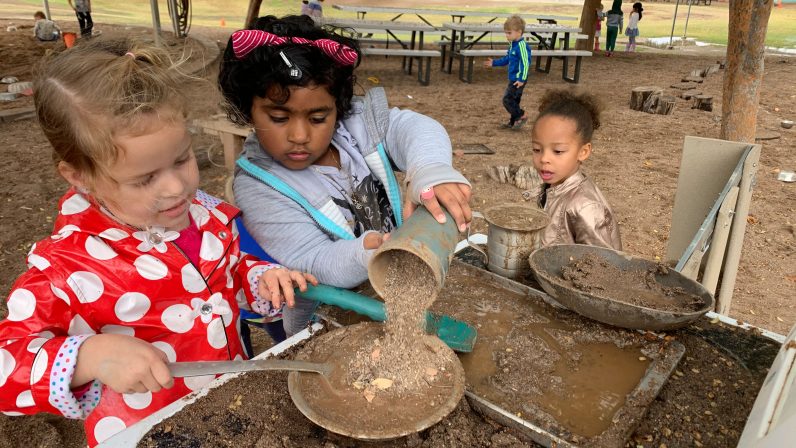 Soup for the Bad Guys

The rain was a blessing for our dry desert.  It also transformed our playground into a mud bog that inspired all sorts of imaginative play.  It was a heyday for small persons in brightly colored rain boots.  On Wednesday I noticed a group of young sand chefs, madly stirring and pouring muddy water into a pie tin.  I asked what they were cooking and they replied, “We’re making soup for the bad guys.”  I never found out who the bad guys were, but did see the same girls later, offering two tins of sand muffins to a group of lively boys.  I’m not sure who ended up with the soup.

Mud balls were a hit with preschoolers.  Everywhere I turned there was another small pair of hands molding a large quantity of juicy mud into a ball of earth.  I have no idea where those mud balls ended up, and I’m hoping it wasn’t in classrooms.

Since the playground was like a chain of lakes in northern Minnesota, we tried to minimize wet shoes and other clothing items by keeping the kids in the sand circle area.  During second recess I invited a few of the older kids to go out to Gwen’s Castle.  A herd responded.  Before I knew it, children were scrambling up trees and a large gathering formed beneath each tree waiting for a turn.  I jumped into crowd control, got the group organized, and gave as many kids as possible a chance to climb a tree.  Another group took charge of a large branch recently fallen on the ground.  They propped it up against a tree outside of Gwen’s Castle and quickly transformed it into a fort.  Creative juices were flowing in every direction.

This morning, remnants of yesterday afternoon’s hail storm were still piled up in the shade screens of the PreK outdoor area.  The teacher used a broom to brush the frozen bits off the screen, giving students a mini hail storm.  Children squealed with delight, some cupping the hail stones in their cold little hands.

The weather definitely created extra challenges for staff, managing more indoor time, as well as the mud and wet clothes.  However, it also presented learning experiences not normally available in our dry desert landscape.  It was the silver lining of the clouds that visited Phoenix this week.