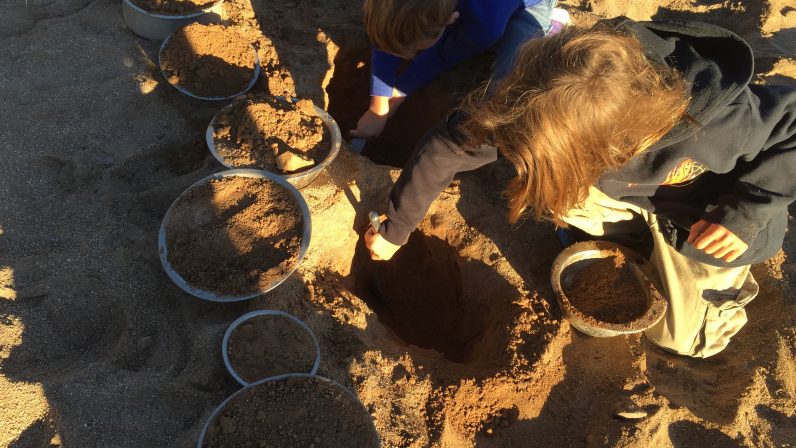 Made for These Times

Last week one of the 4th graders came up with an idea to excavate “Indian clay” from beneath the sand.  This project, located along the berm by the swings, quickly drew the attention of children of all different ages.  They went about their digging project in a remarkably cooperative manner.  The activity was spontaneous and inclusive, a fine example of the type of interaction that happens when children are encouraged to broaden their friendships beyond their age peers.  The project was eventually moved to another area less in the way of the traffic flow and a few kids still enjoy the safe, happy practice of excavating small bits of earth.

In contrast, this morning I watched a video of Syrian refugees arriving on the Greek island of Lesbos (http://video.samaritanspurse.org/the-rising-tide/).  Their boats, heavily laden with families and many young children, were actually rafts, the kind of rafts generally used for pleasure and thrill seeking.  Children with hypothermia were quickly whisked into the arms of relief workers and wrapped in space blankets.  Right behind the group unloading was another raft.  And another.  One relief worker said 60-70 boats a day might land there. The peril is immense, and it’s hard to imagine the conditions they’re leaving behind.

Sometimes my life feels challenging, holding space for over a hundred families on a regular basis.  Having access to details of people’s lives intensifies awareness of their suffering.  The physical and emotional state of people near and dear to my heart is of great concern.  Generally not a worrier, lately the state of our planet, from the plastic-filled oceans to the desperate refugees, has weighed heavily on my mind.  The steady stream of one intense situation after another has often caused me to doubt my ability to gracefully handle the next one.

During a moment of self-doubt, a beautiful piece of writing appeared on my screen (http://theunboundedspirit.com/we-were-made-for-these-times/).  Written by Clarissa Pinkola Estes, she reminds us to “ not lose hope.  Most particularly because, the fact is that we were made for these times.”  She continues by mentioning the abundance of awakened beings currently on the planet and compares them to “seaworthy vessels.”  In her words, “there have never been more able vessels in the waters than there are right now across the world.  And they are fully provisioned and able to signal one another as never before in the history of humankind.”

As a small, progressive independent school, we devote so much of our energy to being good stewards of the planet.  We encourage kindness, healthy living, and innovative thinking.  Lately, it doesn’t seem like enough.  Estes’ words offer encouragement:  “Ours is not the task of fixing the entire world all at once, but of stretching out to mend the part of the world that is within our reach.  Any small, calm thing that one soul can do to help another soul, to assist some portion of this poor suffering world, will help immensely.”

I’m thinking of ways to directly help Syrian refugees.  In the meantime, we will continue to offer a safe place on the planet for young children to dig in the earth, to express their true selves creatively, and be guided by teachers who care deeply about the next generation’s future.  We are made for these times, and I personally plan to keep doing what I can, as long as I can.