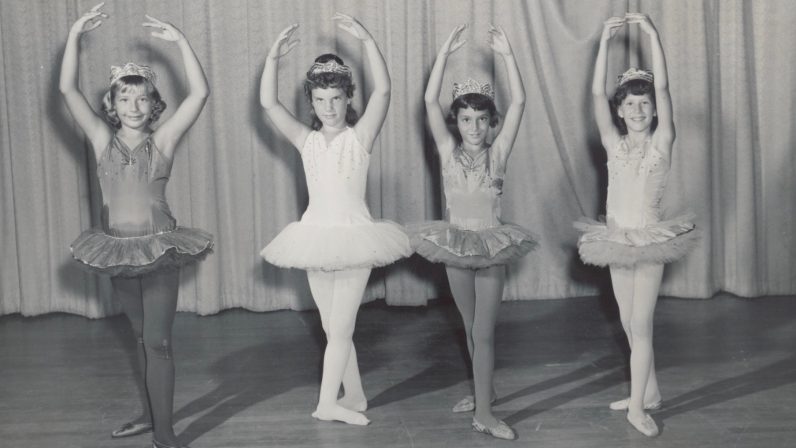 I was a ballet failure.  Or at least it may have looked that way from an outside perspective.  I tried it for awhile and probably even enjoyed the lessons from our teacher who traveled from a nearby town to instruct us in the basement of one student’s house.   Eventually I gave up ballet for tap, because I preferred the sound and the shoes.  A vivid childhood memory was the day my mom drove me to Lincoln to buy my tap shoes.  I remember sitting in the back seat of our car, holding my tap shoes in their box during our 90-mile ride home.  It was pure joy.  My tap dancing career was likely not even as long as my ballet era, before I moved on to something else.  I played piano, then gave it up.  The alto horn and eventually French horn were in my repertoire of musical experiences, which in high school were abandoned for cheerleading.  Two friends and I taught ourselves how to play guitar when I was around eleven, and I have to say it was one childhood interest that has remained with me.

My life pattern has been intense immersion into an interest for a period of time, then transitioning to something else.  It’s been that way with my art, too.  Some might consider it obsessive behavior; I prefer to think of it as hyper-focusing.  Over the years I’ve learned how to do a lot of things, many of them self-taught.  It’s a pattern I’ve found both intriguing and self-doubting, wondering why I stick with very few interests for any length of time.  A few months ago I discovered a term “multipotentialite,” (http://puttylike.com/terminology/) that helped me understand this tendency.  I even wrote a blog about it (https://www.awakeningseedschool.org/2015/10/multipotentialites/).  Recently another current obsession of mine, podcasts, led me to a new perspective on this “jack of all trades” tendency.

Tim Ferriss, creator of The Tim Ferriss Show, produced an episode called “The Top Five Reasons to Be a Jack of All Trades.” (https://overcast.fm/+BmGWucNfc)  There were a couple points that stood out.  First, he said, “In a world of dogmatic specialists, it’s the generalist who ends up running the show.”  He used Steve Jobs as an example:  “He had a broad range of skills and saw the unseen interconnectedness. As technology becomes a commodity with the democratization of information, it’s the big-picture generalists who will predict, innovate, and rise to power fastest.”  In other words, it is advantageous for a leader to be a generalist because he or she is the one who has the responsibility of connecting the dots and keeping the big picture in mind.

The second point that resonated with me is this:  “It’s more fun…The jack of all trades maximizes his number of peak experiences in life and learns to enjoy the pursuit of excellence unrelated to material gain, all while finding the few things he is truly uniquely suited to dominate.”  The idea of maximizing peak experiences throughout life makes sense.  It suggests that as humans we have the opportunity to continually grow into and beyond experiences that are challenging, stimulating, and fulfilling.  We don’t have to give up or feel useless, just because we’re not as good at something as we were earlier in our lives.

This is a powerful message we can pass on to our children.  Life is an ever-changing process.  Our bodies and minds change, as do our interests.  When we fully embrace new passions that come along, they inform the next version of ourselves.  It doesn’t have to be viewed as a failure or lack of focus, it’s just the next thing.  And in the meantime, the present is filled with what we love.