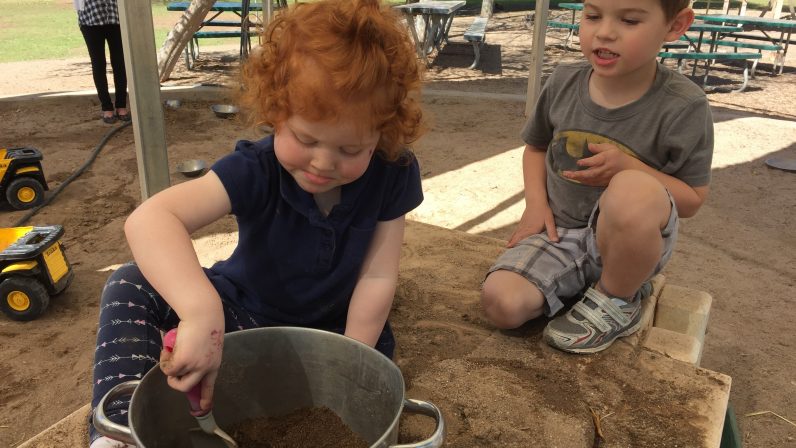 Monday’s playground duty with the Early 3s was not without its regular events.  Children eagerly filled their pots and pans with water, dumping it out almost immediately so they could stand in the refill line again.  Bright yellow truck beds with crusty sand formed a queue for a makeshift carwash.  Preschoolers used their spoons to expand holes filled with muddy water and without hesitation, sat in those same murky pools.  Shoes, leggings and shirt sleeves absorbed water that fortunately dried quickly, thanks to the sunny day.

Two children sat together on the small white platform in the middle of the sand circle.  One child did most of the mixing, while her friend offered suggestions from his nearby perch.  They chatted enthusiastically as they poured and stirred.  “We’re making a super cake!”  With all the dedication put into their cake, I’m certain it had super powers.  With the level of imagination that went into their culinary project, how could it be any other way?

Once again indulging my podcast habit, over the weekend I found myself listening to an engaging On Being conversation (https://www.onbeing.org/program/patrisse-cullors-and-robert-ross-the-resilient-world-were-building-now/8425) with Patrisse Cullors, one of the co-founders of Black Lives Matter.  Something she said opened a huge insight:   “The last thing I’ll say is Black Lives Matter is a rehumanizing project. We’ve lived in a place that has literally allowed for us to believe and center only black death. We’ve forgotten how to imagine black life. Literally whole human beings have been rendered to die prematurely, rendered to be sick, and we’ve allowed for that. Our imagination has only allowed for us to understand black people as a dying people. We have to change that. That’s our collective imagination, someone imagined handcuffs, someone imagined guns, someone imagined a jail cell. Well, how do we imagine something different that actually centers black people, that sees them in the future. Let’s imagine something different.”

For the last several years in particular, I’ve read, written, and thought about the value of play-based education for its contribution to the development of children’s imaginations.  I’ve looked at it as something that enhances one’s creativity and brings new ideas into our lives.  I’ve believed in the power of imagination during my entire career as an educator, although in this moment it seemed I was being invited to consider imagination at an entirely new level.  Ms. Cullors’ words opened a door to a fresh perspective.  Imagination is what cracks open our awareness of future potentiality.  It gives us a vision for shifting the consciousness of an entire species, the human race, in this case.  It helps us bring into being that which could never have been remotely thought of as possible.  Like anything, practice enhances experience.  The practice of using imagination during childhood breeds our next generation of visionaries.  This week I realized the power of super cakes made on the Seed playground.  It’s more than the sand being stirred, ready to serve up to the world.