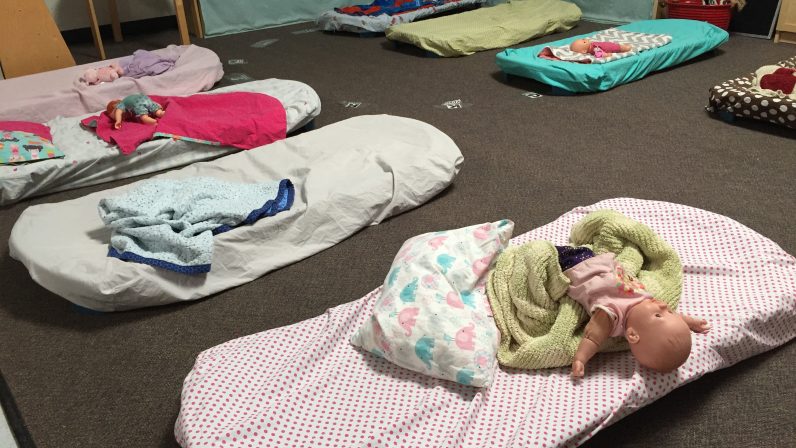 Last Friday Danielle and I had the rare privilege of covering lunch and nap time in the Toddler 2s.  Both teachers were away, attending to family matters, and all our subs were occupied.  Over the years we’ve both spent our share of time in the toddler classrooms, particularly at lunch time and helping with the transition to nap.  We felt fully confident in our abilities to handle the situation and our mantra was, “We Got This.”

Lunch went along smoothly as the adorable little toddlers sat at the tables with their reusable containers open in front of them.  They chatted and mostly sat in their chairs as they ate.  A few needed assistance with certain items, like squeezing the remaining yogurt out of its container.  Some food ended up on the floor, although most of it ended up in their mouths.  I was totally impressed with one tiny child who ate an entire large sandwich!  Once children finished their lunches, they began the transition to either using the potty or having their diapers changed.  Danielle took charge of this part of our duties and I started cleaning the tables and floors, precisely following health department regulations for sanitation.  One group of children was still at the table finishing up their food.  I couldn’t clean their table yet, so I starting pulling out the sleeping cots.

Each cot had a child’s sheet on it.  Once the cots were arranged (not exactly in their regular spots but good enough for the day), I began taking their individual bedding out of cubbies.  I realized at that moment we had a problem.  We didn’t know which cot belonged to each child.  Since neither Danielle nor I had this information, we turned to an expert, one of the two-year-olds.

I held up the blanket and comfort toy of one child and asked the little expert where the matching cot was.  She nailed it.  Moving on to the second and third child, I followed the same procedure.  Bingo.  This continued until each child’s items were in their appropriate place.  Our information provider finished at 100%.  Everyone had what they needed and we were ready for nap.

The only thing left was determining who needed a pull-up for nap and who was reliable enough in underwear.  It was hard to get this information out of a few children, so we returned to our expert.  We asked if a specific child usually wears a pull-up at nap and her reply was, “I guess.”  Hmmm…  The certainty about bedding and cots didn’t seem to apply to pull-ups.  Erring on the side of caution, there were probably a few more pull-ups than normal that afternoon.  Nevertheless, the children fell asleep with relative ease, the table and chair washing was completed, and we actually had time to pause for a few breaths.  In addition to our appreciation for the teachers growing one hundredfold that day, it was reaffirming to know we are among competent two-year-olds who can help out in a pinch.