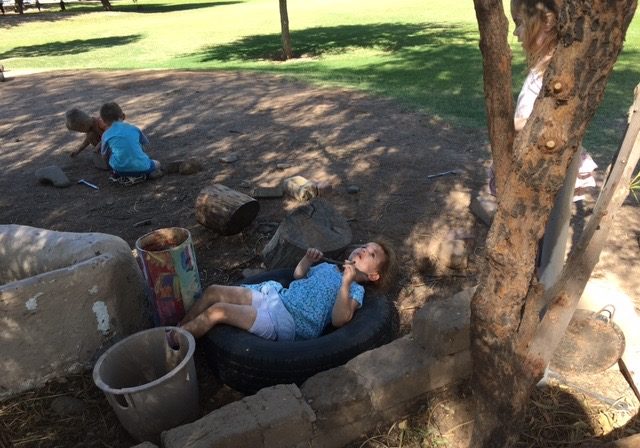 For the past six years I’ve given two Tuesday afternoons a month to serving as a volunteer yoga teacher at Phoenix Children’s Hospital. Each time I go I work with two different groups of children and rarely see the same child twice. Some of them have done yoga before at school or with a family member. Many have never touched a yoga mat. I never know who will be present or what’s going on in their lives. A few come in resisting nearly everything I teach, and most are willing to give it a try. There are some who connect with the practice immediately and deeply. Others refuse to let down their guard. Interestingly, it’s rare if I don’t reach each child at least once during our yoga session.

Some kids respond to challenging poses, particularly those that involve balance. Arm balances are especially engaging to a few and I can imagine them practicing further in their rooms. We do a practice called “Sitting Like A Frog,” which helps children learn to sit still without moving or making a sound. Often a child might resist everything else and then fully settle into a sitting practice. One activity we do that captivates nearly everyone is lying quietly on the floor at the end of the session. I generally talk them through a peaceful visualization, reminding them to breathe with awareness. Most times I play soft music. Then there is a moment when we are all quiet. Something powerful happens when everyone settles into this silent space. A few children fall asleep and the rest are suspended in the stillness. I believe it’s a state of being often overlooked in children’s lives these days.

We have regular conversations as a staff about giving kids choices, stimulating their creativity, meeting social-emotional needs, and designing curriculum that inspires both their minds and hearts. Not as frequently discussed is how to create quiet spaces for them reflect, daydream, and wonder. Sometimes it feels like one more thing to add to the list of elements to include in the program. Then again, maybe it’s just a matter of pausing and noticing how it’s already happening.

One of the teachers sent me a photo this week of a preschooler lying on her back in a tire in Gwen’s Castle. I have no idea what she was doing or thinking. Maybe she was gazing at the leaves or clouds above her. Perhaps she was involved in some game with friends that required her to be lying down. Regardless, there she was on her back in a tire, looking up at the sky. I’m certain it wasn’t quiet around her, but somehow she managed to find a place to be still. As we continue to develop ways to spark our students’ imaginations, this photo, and the stillness I felt with a group of children at the hospital, will remind me to make sure we also offer quiet spaces and places for children to dip into during their busy lives.