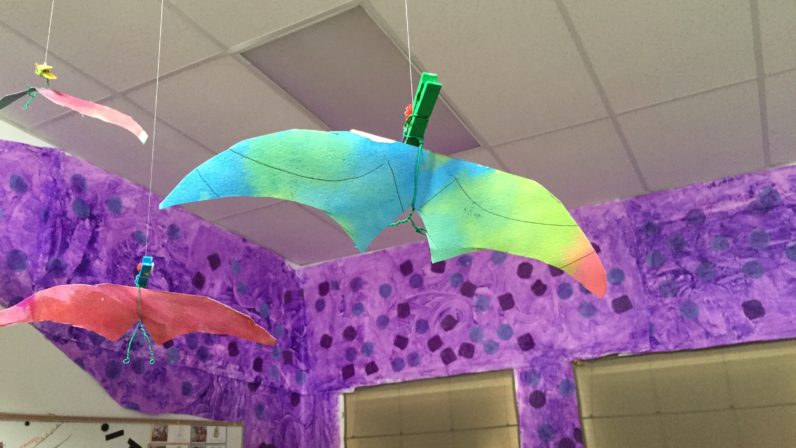 As Big As a Dinosaur

Last Friday there was a commotion outside our office door.  I peeked out and noticed a small person holding a long string.  Sure enough, it was one of our Preschool 4s.  She exclaimed, “This is how long my dinosaur is!”  The string extended the length of the hallway.  Her dinosaur, the diplodocus, was the longest dinosaur, sometimes reaching lengths over 100 feet.  Most of its length was taken up by its neck and tail.  Although she is a pint size human herself, the string holder’s enthusiasm was as big as her dinosaur.

She was not alone in her passion for dinosaurs.  On Tuesday and Wednesday, the school was electrified by dinosaur mania as the Preschool 4s held an open house, first for parents and then for each class.  I stepped into the room on Tuesday and it was standing room only, as parents took the tour through dinosaur displays, abuzz with the same enthusiasm as their children.  The next day as each class toured the exhibit, the zeal for dinosaurs never waned.  Not even a fire drill right in the middle of it diminished the energy for this topic.

I’ve watched this study evolve over the past couple months.  It started with The Magic Treehouse series, starring Jack and Annie, time travelers.  Keeping with Preschool 4s tradition, the kids voted on the study and dinosaurs won this year.  Although it wasn’t the teacher’s first choice, she jumped right in with the children and embraced the subject alongside them.  She became an emergent learner, too.

Lately we’ve been talking as a staff about relevancy with curriculum content.  I understand why experts recommend sticking with topics that are immediate to a young child’s world.  It makes sense that the more hands-on the curriculum is, the more children will make a connection with it.  A topic like dinosaurs could fall outside of this category, since there are no dinosaurs left on the planet and they are an abstract idea.  Yet, this dinosaur study, like other studies around the Seed, has had its own kind of relevance.  The children chose the topic because they were interested.  Their gifted teacher, like others in the building, figured out a way to make it accessible.  Through books, conversations, projects, measuring with long strings, and a visit to a local dinosaur museum exhibit, they claimed this content as their own.  I can’t help but think that this kind of study, presented the way it has been, enhances young children’s imaginations.  Their passion for learning about something that no longer exists enables them to reach back in time and visualize what might have been.  In the same way they take in fictional stories, immersion in such topics expands their inner world and invites their immediate individual expression to grow as big as a dinosaur.