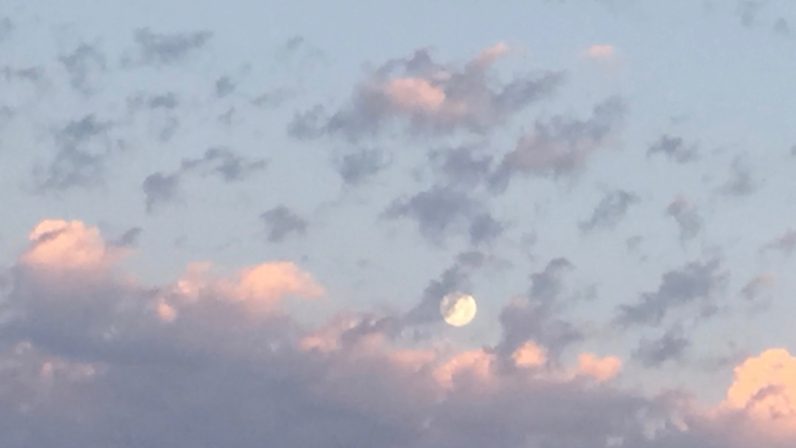 I had great expectations for the strawberry moon.  For the first time in 70 years, the full moon and summer solstice landed on the same day.  I learned it is called the strawberry moon because it’s during summer strawberry season. I knew it would be spectacular and I looked forward to gazing skyward as it rose into the darkness.  Unfortunately, it didn’t happen.

Instead of a bright, full strawberry moon, there were layers of clouds.  There would be no full moon viewing for me on the night of the summer solstice.  Being an eternal optimist, the next morning I headed out to our back yard hoping to catch a 5 A.M. view before it set in the west.  At first I couldn’t find it in the sky at all; then as I waited, a sliver of white caught my eye.  There it was, concealed by clouds.  Waiting longer, from behind pink and lavender clouds, the fading strawberry moon revealed itself.

I have learned through my yoga studies that the dance of life contains both concealment and revelation.  Certain information may be concealed from us at a given time, for reasons we don’t know.  I’m sure there’s a reason why our school was flooded on the third day of our summer camp, but it’s not clear why at this point.  Sometimes we never learn until later the meaning behind a specific situation.  There are times we never find out, having to absorb the unknown into our lives.

When we were flying home from Ireland two summers ago, I hoped longingly to have one final glimpse of the West of Ireland.  It was a magnificent place that spoke to my heart.  As we lifted off the ground from Dublin, the earth below looked like a detailed patchwork quilt of green.  By the time our plane approached the west coast, the land below was completely concealed by a layer of misty clouds.   This memory came to mind on Tuesday morning as the strawberry moon remained out of view.  Another lesson in concealment.

I’ve come to believe that one of the gifts of concealment is that it forces us to use our imaginations.  We don’t have answers, so we’re left to our own devices to find solutions.  Concealment inspires creativity and extends the realm of what we believe is possible.  It also forces us to step outside ourselves in ways that might make us uncomfortable to see things differently.  As Wayne Dyer said, “If you change the way you look at things, the things you look at change.”  Both a hidden moon and a school flood hold endless opportunities for change.