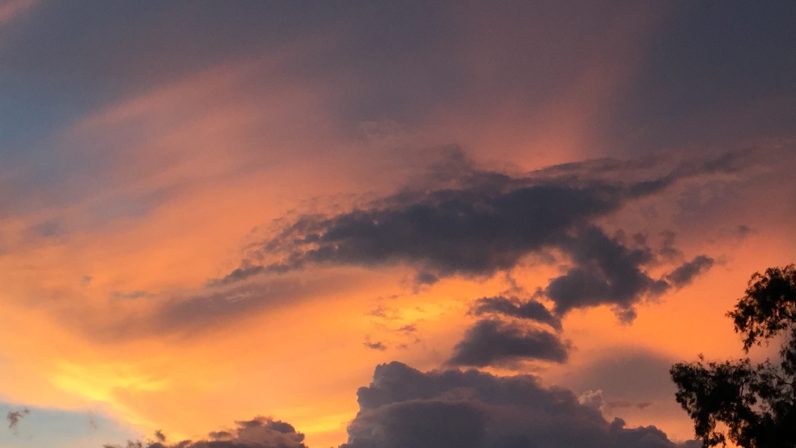 This day is finally here.  Since my last post, I’ve traveled Scotland, returned to the Seed for the last day of summer art camp, then flew to Minnesota for a few days with my parents.  My return to Phoenix on Sunday evening was not without its share of drama—our plane was due to land in the midst of the storm that closed the airport just minutes before our anticipated arrival.  As we entered the Phoenix area, the sky outside the plane was one of the most intense I’ve seen, similar to last night’s sky, except there were dark pockets of rain laced with frequent lightning.  We circled around for a bit, then the pilot informed us we were headed to Ontario, California for refueling.  After an hour and a half on the tarmac in Ontario, waiting for the Phoenix airport to reopen, we flew to Arizona.  It was 1 A. M. when I finally walked into our house.

Throughout the whole ordeal, I was concerned but not afraid.  It did give me an opportunity to reflect on my life and my own mortality.  Somehow I believed it would all work out and that I still have unfinished business on Planet Earth.  Today I am back at the Seed to continue my work.  Yet today it’s different.  For quite awhile, this day has been an abstract concept and now it’s arrived.

As part of our five-year succession plan, we determined that on August 1, 2016, Danielle Dueppen, our highly competent assistant director, will step into the executive director position.  My title will change to founding director and my work at the Seed will shift in a new direction.  For several years we have intentionally planned for this transition and I feel ready for the change.  Danielle is prepared for her new responsibilities and I will continue to support her work to the best of my abilities.  I’ve been through an array of feelings and emotions as we’ve approached this day.  Right now what I feel most is excitement for the change and the opportunity to use my creativity to nurture the Seed in new ways.  My remaining years with Awakening Seed will be devoted to ensuring it will thrive well into the future.

On the last day of summer art camp I was in the audience for this year’s Way-off Broadway Production.  It was the 26th in a long line of summer performances, many of which I directed in the early days.  This year’s play, with a theme emphasizing care of the earth, had a wealth of humor, singing, and excellent acting.  I was so affected by the quality and message of the performance, and said so to Jay, our music teacher who directed the show.  What touched me most was that years after I’d turned over responsibility of directing the summer production to someone else, all I’d ever hoped it would be is still alive and well.  I have no doubt that our leadership transition will fare the same.  In fact, I can’t think of anything about which I am more certain.