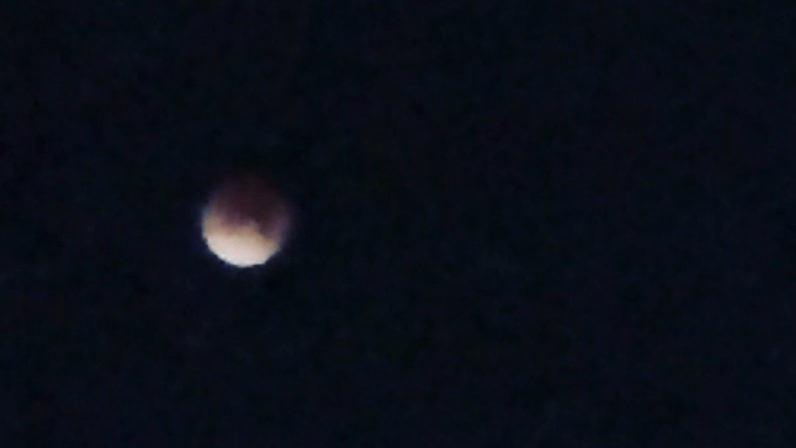 The last morning of January, the moon had all sorts of things going on.  It was a super moon, when the moon appears larger because it’s closer to the Earth.  Additionally, it was a blue moon because it was the second full moon in the same month.  It was also a  full lunar eclipse, sometimes called a “blood moon” because the shadow gives the moon a reddish color.  The bonus was no waking up at 3 A.M. and sitting in the back yard with a blanket wrapped around me, waiting for it to happen.  The full eclipse occurred right during my regular morning walk.  In the winter months, since the sun rises later, I walk in our neighborhood, instead of the nearby canal.  As I made my way along familiar streets, I saw several neighbors I don’t know.  A few dog walkers were checking out the moon as it loomed overhead, while their dogs checked out the grass.  One woman I’ve never seen before was standing in front of her house drinking her morning coffee.  We exchanged greetings and expressed our mutual awe for the lunar display in the western sky.

The super blue blood moon (which I humbly attempted to capture with my iPhone) was visible in many places around the world (http://www.bbc.com/news/world-42890838). Each place, each person had its own vantage point.  As humans, we all look at life from our unique perspectives, responding with an individual state of mind.  That morning my response was wonder.  Around 7:00, the night sky transitioned to blue.  The moon and its shadow became fainter and fainter, until I could no longer see it.  I knew it was still there, although it appeared to have become one with the sky itself.

Ever since the moon and its shadow dissolved into the morning sky, I’ve had “Moonshadow,” the Cat Stevens song, running through my head.  It’s a song about the shadow created by moonlight.  I loved listening to it in my early twenties.  Just for fun, I thought I’d look up the meaning of its lyrics.  I found a wide range of interpretations.  This one resonated the most:  “we are always leaping and hopping on a moonshadow—the inescapable present moment.” (http://www.songfacts.com/detail.php?id=288).  I know the original song is about a shadow created BY the moon.  Wednesday’s moonshadow moment was different; it was a shadow ON the moon, made possible by the unique alignment of  the sun, moon, and Earth.  In moments of presence, like the one that occurred on the last day of January, I’m most aware of the smallness of my own being.  Yet even in my smallness, I know I belong to something vast and glorious.  We all belong.

To hear “Moonshadow,” go to this link:  https://www.youtube.com/watch?v=Ag4NhsfemvE