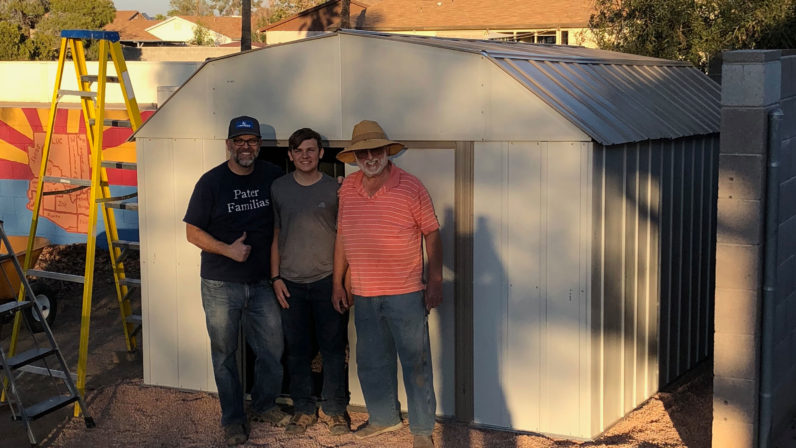 There was a time when we had chickens.  One of our talented dads built a coop for them, including the enclosure that, in recent history, has become the maintenance storage area.  The chickens have been long gone, for a variety of reasons, and the coop remained, filled with all sorts of things not suitable for contact with children.  Over the years, the sturdy coop deteriorated, due to excessive desert conditions and the plentiful populations of insects that lived in and around it.  It was time for a replacement.  Thanks to a helpful Boy Scout,  we now have a new maintenance shed in the place where the old coop stood.

Connor Limburg, age 15, came to the rescue.  Connor is the son of Jenny Limburg, our Toddler 2s lead teacher.  When he was eight years old, he started as a Cub Scout and his mom was the den leader.  He stayed with it and eventually came to a point where he needed a community service project to demonstrate his leadership skills, and fulfill the requirements of becoming an Eagle Scout.  Connor said, “When I heard that Awakening Seed had a need for service I was excited to help out.”  He talked with Bill and they decided on the project, a new maintenance shed for the Seed.

After determining what the project would be, he planned a car wash to raise funds for the shed.  Connor reported, “I sent emails and made flyers for the car wash.  I also sold tickets at the Seed, door to door, and at church. We ended up raising $700. “  Once the money was raised, Connor asked friends and neighbors to come help.  On Friday night they collected tools, read the shed instructions, and sent email reminders.

Early Saturday morning, about 25 people showed up to help.  There were helpers of all sizes, who sorted and hauled rocks, raked gravel, and tore down the old chicken coop and overhang.  Pizza and boxes of donuts kept the workers going throughout the day.  Connor and his dad, along with Bill, were there the whole day, from about 8:30am-5:30pm.  The day had its successes and challenges, between tearing down the coop and assembling the new shed.  Connor reflected on his service project day:  “I learned that I can do hard things. I know that if I make a goal, and have a plan, I can achieve my goal. This was the first time I had to lead a group of people and separate them into groups, giving them instructions. I was nervous but my dad and Bill helped me along the way. Even though it was really hard work, I felt good knowing I was helping the school.”

Before long, Connor will have his ceremony and become an Eagle Scout.  This is a huge accomplishment for a young man and his family who has supported him along the way.  We’re grateful to Connor and the Limburg family for thinking of the Seed as a recipient of his Eagle Scout project.  And the Seed family is proud of Connor, knowing he’ll apply the leadership skills he learned through this endeavor in his promising life ahead.