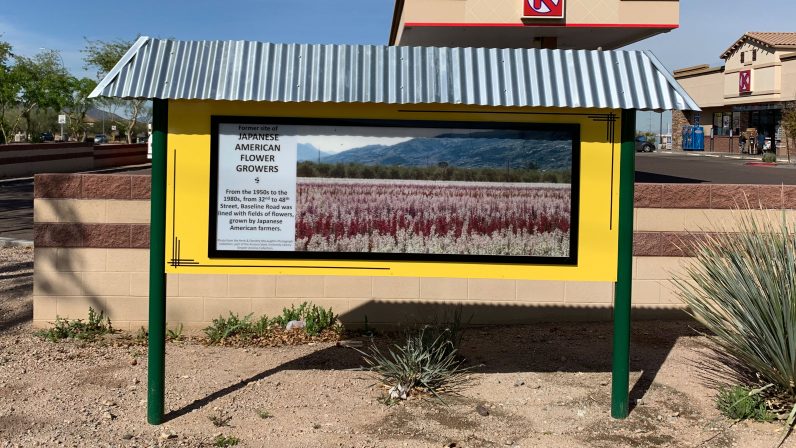 A History of Flowers

On my way home the other day, I noticed a yellow sign next to the Circle K at the corner of 40th Street and Baseline.  I hadn’t seen it before and realized it was a marker for something that had been near and dear to my heart years ago, the Japanese flower gardens.  Long before the Seed moved to south Phoenix, we used to go there often to buy flowers.  The colorful, fragrant fields of flowers were a special feature that attracted me to this area.  I had no idea in the mid-70s that one day the Seed would be situated so close to where all the flowers were grown.

Several Japanese families sold flowers and vegetables along Baseline Road for over fifty years, particularly between 1950 and 1975.  Another sign by the first one I noticed gives this history:  “In the 1940s, during World War II, many Japanese Americans were imprisoned in internment camps, which meant they had to abandon their farms and homes.  After the war, they were released with few possessions.  Some returned to Phoenix and settled near the foot of South Mountain and returned to farming, eventually creating the area known as the Japanese Flower Gardens.”

Kajiuro Kishiyama started farming at 40th and Baseline in 1936, and his son George, along with his wife Betty, continued the business until they closed in 2006.  George and Betty’s grandsons were Seed students.  In 2003, when I was still a classroom teacher, I took my class over to George and Betty’s for a field trip.  They gave us a full-on tour, which included walking into the refrigerated storage rooms and climbing on their working tractor.  My students sketched flowers while they were there and, upon returning to the classroom, made stunning watercolor paintings and wrote poems about their visit.  Here’s an excerpt from one of the poems called “Ice Box Memories.”:

“I remember that Mom
would take me to the icebox
I would dance around the flowers
that were cold as ice
and that were wrapped
in beautiful vases
I asked Mom if my memory was true,
she replied with the answer yes
as I leave
I walk with memories of that place
in my head”

We ended up compiling our poems, watercolors, and photos into a book we gave to Betty and George, as well as an extra copy for the Seed archives.  To launch a new poetry project with our 1st-4th graders this past week, I found the book and shared it with current students.  Then I invited them with paper and colored pencils to draw plants and flowers in our own Seed gardens.  As they sat with their clipboards, sketching and recording details, I thought of the huge fields of flowers no longer at the corner of 40th and Baseline.  At that moment it seemed even more imperative that we keep training young artists and writers to notice, record, and care about the beauty of nature around us.