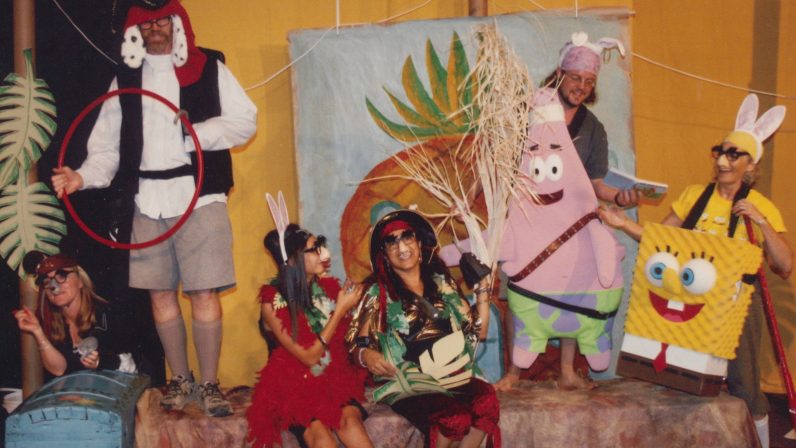 For over thirty years, the Mystery Theater has been a part of the Seed’s annual Halloween carnival.  It began in the 1980s as a production put on by Seed staff to entertain carnival attendees.  Dozens of staff have participated in all phases of the production, including script writing, acting, choreography, set design, costumes, music management, crowd control, and other thankless jobs.  Some casts have had more than a dozen actors, such as in “Snow Whine and the Seven Dorks.”  Others have had only a handful of dedicated stars.  On the night of the carnival, the Mystery Theater players provided plenty of humor and hilarity for multiple audiences.

It goes without saying that a production of this magnitude requires considerable time and effort.  Particularly at this time of year when teachers are writing progress reports, preparing for conferences, and managing their lively classrooms, it’s hard to find time and energy for one more thing.  In past years we always managed to wrangle up enough staff to pull off a Mystery Theater production.

This year, however, is different.  Although many of us have the greatest of intentions, life seems to be drawing us in other directions during this year’s pre-Halloween season.  We have, therefore, made the difficult decision to take a break from Mystery Theater for the 2019 carnival.  Already ideas are surfacing for an alternative activity, which will be announced in the near future.  Additionally, the Mystery Theater regulars will actually get to attend the carnival and share their talents in other ways.  There is no end of possibilities that might result from this shift.

We don’t know what the future will hold.  Perhaps the Mystery Theater players will miss the highlight of their acting lives so much they’ll rally for a performance in 2020.  Or maybe something else equally mysterious and wonderful will take its place.  We never know.  To all our enthusiastic audiences, we are grateful for your loyalty over the years.  Thank you for laughing at our jokes, groaning at our puns, and for giving us a chance to show the wacky side of the Seed in a marginally appropriate venue.  See you at the carnival.