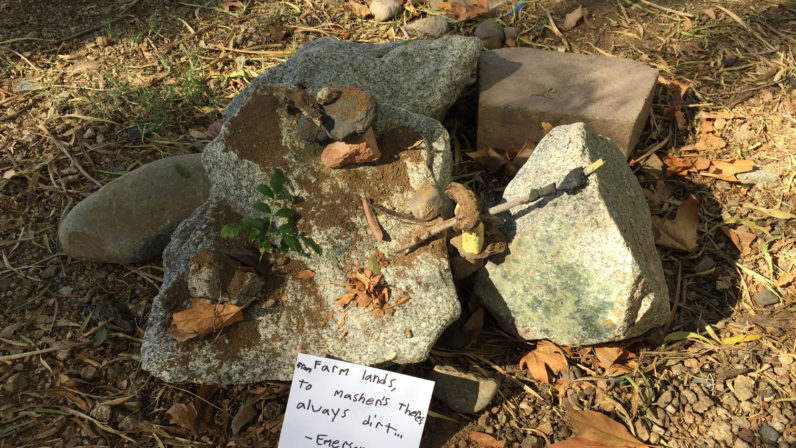 This week Gwen’s Castle and its outlying area became an art gallery.  Inspired by the work of Andy Goldsworthy, a British artist who works with nature to create his art, the 3rd/4th graders made their own sculptures and arrangements.  This project was part of the Seed’s Art Masterpiece program, where parent volunteers present a lesson on a famous artist, then invite students to respond artistically.  The Goldsworthy lesson was taught by our Spanish teacher, Diane, who is also a parent in the class.  “Goldsworthy regards his creations as transient, or ephemeral. He photographs each piece once right after he makes it. His goal is to understand nature by directly participating in nature as intimately as he can. He generally works with whatever comes to hand: twigs, leaves, stones, snow and ice, reeds and thorns.” (http://www.morning-earth.org/ARTISTNATURALISTS/AN_Goldsworthy.html)  Our 3rd/4th graders worked is this spirit, recognizing that their work also was ephemeral, because it was made of natural objects and was created on the playground where everything is in a constant state of change.

Each work of art had a display card next to it, explaining the artist’s thinking.  These little cards said so much about the work and the artist.  I spent time looking at each one, photographing as many as I could.  The first creation was a fairy house that I would certainly want to live in if I were a fairy.  Its sign read, “The fairy home.  It is so soft!”  Another small house called “the treehouse of nature,” looked equally inviting.  Nearby the “rock and stick castle” was a flat log with similar sized white rocks resting on pieces of bark arranged around the edges.  One arrangement that intrigued me the most was a bouquet of dried leaves, sticks, and grass tied up with shoestring acacia leaves.  Next to it was this note:  “It was a cold day.  I would keep trying to build my flower leaf bouquet.”  Not far from the bouquet was an assemblage of rocks, sticks, leaves, broken chalk, and a sprinkle of dirt.  The message on the description card still has me pondering:  “From farm lands to machines, there’s always dirt.”

Today I checked with the artist to see if he could elaborate on his thought process behind this statement.  He didn’t have much to add, except to say that the idea just came to him.  As with all good art, it left me with the chance to make my own meaning from his creation.  Here’s my interpretation:  No matter if we’re talking about our food or the technology carrying us forward into the future, there is always the earth to consider.  This includes soil for crops, the land where we build our dwellings, and playgrounds where children use their imaginations by playing in the dirt.  Either way, we need to protect and preserve what we have.  It’s also important to educate children in a way that they have enough time for ideas like this to “just come to them.”  It’s our job to make sure there will always be dirt.