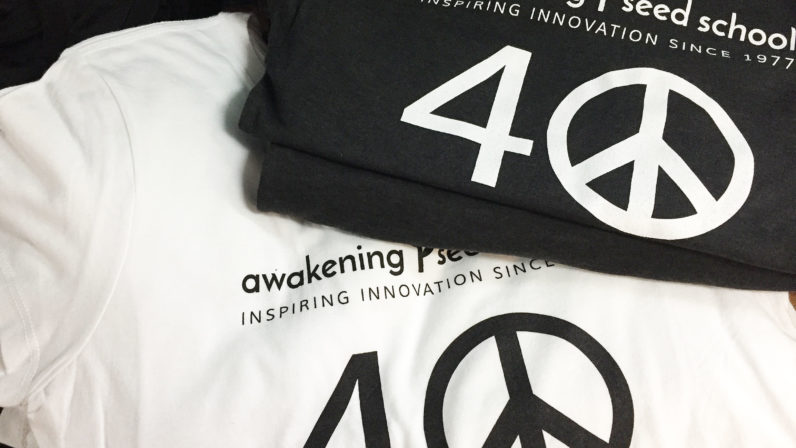 Boxes arrived this week filled with our special edition 40th anniversary t-shirts.  The design took an interesting detour right before the final proof stage.  Originally, an illustration of the earth was inside the zero.  While working on a draft for the mural design, we played around with making the zero into a peace sign.  The idea stuck, we contacted the printer to see if we still had time to make the change, and before we knew it we had a design that not only represents the school’s 40 years, but also can read “for peace.”  It was a bonus turn of events that seems symbolic of everything the Seed has been about these past four decades.

The approaching Earth Day celebration has stirred my inner world.  So many memories of people and events have swarmed back into my mind.  I’ve been thinking of where I was forty years ago.  Around this time in 1977, I was a stay-at-home mom with a three-year-old and a seven week old baby.  Still finishing my undergrad degree at ASU, I wasn’t sure what my future would be.  It most certainly wasn’t my plan to start a school.  After listening to my spiritual teacher describe a school where children of all walks of life could come together and be celebrated for who they are, I made a comment that drastically changed the course of my life.  I said, “I’d like my kids to go to a school like that.”  Without missing a beat, my teacher replied, “Good.  Why don’t you start it?”

I was hardly in a position to start a school.  In addition to my two small daughters, we had little money, only my children’s toys for equipment, and I didn’t have a teaching degree.  Nevertheless, my friend Anne Sager and I began talking about the idea of a school.  Over the summer we planned how to begin.  In addition to my two girls and a child I was babysitting, Anne was caring for two children of university professors.  We rounded up four more children and by September we formed a small play group that eventually became Awakening Seed.  Originally we were called The New School, taken from a friend who previously had a school of that name.  She gave us her equipment and materials, so it made sense to use that name.  Two years later we received notice that another school in the state was registered as The New School, so we had to make a change.  Shortly thereafter, the name Awakening Seed came to me in a dream.

The early years were sparse, to say the least.  For the first two years we used the garage of our home, along with the family room and back yard.  We got by with minimal supplies, used recycled materials as much as possible, and formulated a mission statement to which we’ve remained true for the school’s entire lifetime.  It included commitment to planetary stewardship, compassion toward others, and a belief in world peace.  All these years later, the Seed still produces future citizens deeply dedicated to these three strands of the original vision.

While reflecting on the school’s 40th anniversary with a friend recently, he referred to the Seed as “the most benevolent garage startup.”  I thought of other garage startups, such as Apple, that began in humble surroundings and have profoundly changed the world.  If there’s one thing this anniversary is bringing forth it’s the awareness of how much the early benevolence is still alive and well.  Hearing from previous teachers, parents, and Seed alums, I’m grateful for the experiences I’ve had growing the Seed the past 40 years.  It’s been an honor to devote my life to this work and I will continue to support the Seed’s vision as long as I am needed.  Furthermore, I am fully confident that the startup benevolence will spread far and wide well into the future, thanks to all who have been and will continue to be a part of the Seed.