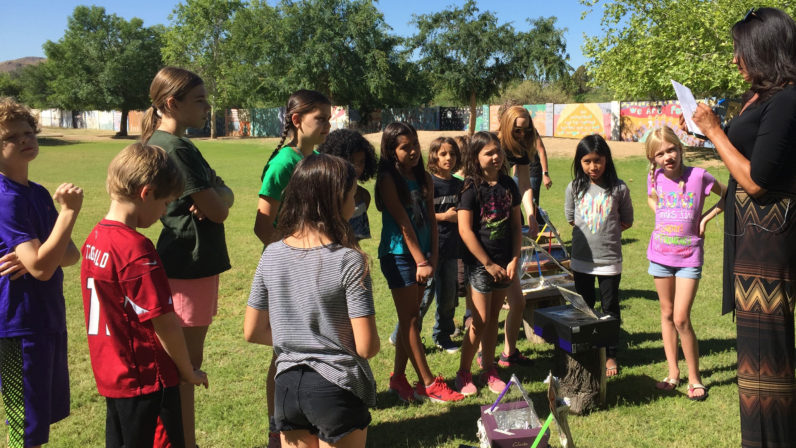 Last week’s Earth Day celebrations delivered a wealth of blogging topics.  On Friday morning, as the Toddler 1s practiced placing recyclables in a bin with a huge recycling symbol on it, the Seed was visited by Channel 3 for a segment of Good Morning, Arizona.  The interviewer, Lina deFlorias, was masterful with the children.  She started with a group from the Preschool 4s who have been studying the solar system and the Earth’s relationship to the sun and moon.  The preschoolers demonstrated with their bodies and 3-D models of planets, the sun, and moon how orbiting works.  One child explained that Pluto “got kicked out of the solar system.”  When Lina mentioned on camera that a child was four, he corrected her by saying, “I’m four and a half.”  By the time the preschool part of the recording was finished, the children had everyone’s heads spinning.

Then Lina ventured outside to check out the 3rd/4th graders’ solar oven projects.  The students worked all week in teams of two to construct solar ovens.  Their ovens were positioned in the sun to cook everything from chocolate chip cookies to cheese sandwiches and quesadillas.  When Lina started interviewing them there was no shortage of articulate information.  One third grader explained how fossil fuels cause problems for the Earth’s atmosphere for both humans and animals.  Another student explained in great detail how each part of the solar oven design contributed to the model’s success.  When asked when someone would want to use a solar oven, one girl responded, “If your oven’s broken, if you’re on a camping trip, or if you just want to try an experiment.”  Throughout the interview, which also included wise words from our executive director, Danielle Dueppen, Lina was respectful of the children and their ideas.  She summed it up by saying that at the Seed we were “baking some smart cookies.”   To see the news segments, check out these links:

The Channel 3 experience kicked off festivities that spilled over into the next day.  Kindergarteners decorated playground trees with collaged Earths with intentions for being helpful to the planet.  After school students and staff used strips of recycled t-shirts to enhance our already cheerful Gwen’s Castle.  The beginnings of a new mural were added to the 40th Street wall.  On the day of our Earth Day birthday celebration (which will be covered more fully in a future blog), one of the teachers arranged to have a petting zoo with baby animals come to the Seed.  She told me the animals’ owners were so impressed with how the children treated the animals.  Normally, they don’t allow children to pick them up.  Since they were so gentle, in the end children were allowed to carry and love them all they wanted.

There are many aspects of our 40th celebration that I will continue to write about and process in the coming weeks.  One thing for sure, it’s good to know that we are cultivating Seeds who are both smart and kind.  Not a bad combination for the Seed’s first 40 years.