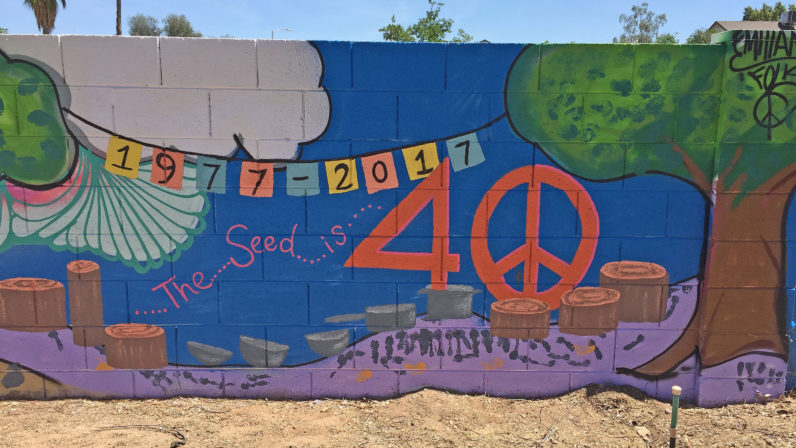 This week as the temperature crept toward 100, Seed artists added final touches to our new mural. On the wall along 40th Street, it’s like no other mural among the dozens painted throughout the Seed’s South Phoenix history.  This one was a community effort, bringing together ideas and talents of many.  It began through a generous offer.

Emiliano Morondos, one of our Seed dads (familiar to several as the Lego Club leader), offered to paint a mural for us.  After seeing a sample of his work, I was eager to put this project in motion.  We decided the 40th anniversary would be a good time to launch it.  Kindergarten through 2nd graders were invited to submit design ideas for the new mural.  Looking through their ideas, Kerri Tornow and I organized themes, looking for elements that would enhance the mural.  One of the elements we liked most was one child’s inclusion of the tree stumps that line one of our sand circles.  They were incorporated into a panel that also has pots and pans, along with kid-stamped spoons.

Once finished, we submitted our composite design to Emiliano.  Kindergarteners applied  the white primer to four panels.  It took a bit of convincing them it was okay to cover the fading murals already there.  I assured them the previous artists would be happy their faded murals were covered by the new beautiful one.  The first day Emiliano arrived to start painting, I had no idea how he would proceed.  His talents with a few cans of spray paint were soon revealed.

I hung around awhile that first morning, learning from this gifted artist.  He even trusted me to do a bit of spraying for the foundation of the trees and clouds.  As we talked and painted I learned more of Emiliano’s story.  He grew up in southern Arizona, in a small town called Arivaca.  His grandparents originated from Hawaii and decided to try living off the grid in Arivaca.  I found out later that his parents and grandparents eventually purchased a local grocery store.  Although it wasn’t part of his early life, he fell in love with hip-hop culture.  He learned as much as he could about it, starting with graffiti writing and eventually absorbing himself in the musical forms of hip-hop.  He’s been actively involved in the culture for over 20 years and loves sharing its magic and intensity with its participants.  He currently teaches Hip Hop 101 at his school Boys and Girls Club where he is the youth development director.

Once Emiliano completed his layers of the mural, children attending the 40th celebration stamped accents of leaves, stones, seeds, and spoons in appropriate spots.  Stephanie Peyton and I spent another day and a half adding a layer of sunflowers, pots and pans, wood stumps, and text commemorating the Seed’s 40th year.  Elementary students finished it off with a final layer of flowers and grass.

When I asked Emiliano to send me a few details about his life, he included the pop phrase “can’t stop, won’t stop.”  Being the word nerd I am, I looked it up.  A commonly used phrase of hip-hop culture, it has multiple meanings.  When I asked Emiliano what it means to him, he said it’s about his dedication to the culture of hip-hop.  I grew up in a different time and space that precluded hip-hop.  I was more of a Bob Dylan, Joni Mitchell kind of girl.  Nevertheless, that historical time held its own “can’t stop, won’t stop” essence.  The Seed is infused with this same dedication to caring for our planet and each other.  Our beautiful mural that blends more than one culture is an extraordinary visual reminder of this spirit of dedication.  I feel blessed to have been given this teaching through the process of making art.  The Seed can’t stop, and won’t stop.