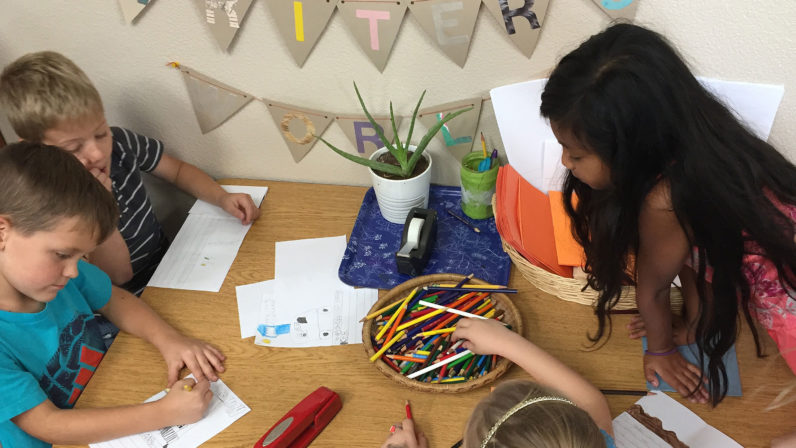 Our Seed writers are on fire.  It’s a rebirth of the writer’s workshops that were prevalent at the Seed in the 80s and 90s.  Although there have been threads of writing throughout the school’s history, we wanted to re-establish the depth and volume of the past.  So every Wednesday of our summer program we met with our elementary teachers after school to discuss articles and book chapters about the practice of teaching a writer’s workshop.  Our discussions were energetic and inspiring.

The teaching of writing is one aspect of being a classroom teacher that I’ve been reluctant to let go of in the past decade as I transitioned to full time administration.  I decided it was personally time to step it up.  At the beginning of the school year each staff member selects a professional target goal for the year.  This year mine is to work in a focused way to re-establish sustainable writing workshops in our three elementary classes.

Once a week I visit the Kindergarten and 1st/2nd grade classes. I work with the 3rd/4th graders twice a week.  Since the beginning of school we’ve talked about what writers do, how they live, and why we write.  We’ve told personal stories, brainstormed topic ideas, and talked about why the good title of a story will make the reader keep reading.  The kindergarteners, who started the year learning about writing letters, have been writing back and forth with me since the first week of school.  They ask for specific materials and offer invitations to come back to their class each week.  They are learning about characters and discovering that stories have a beginning, middle, and end.  Recently the class has been introduced to a character named Fox, created by the late author, James Marshall.  After our mini-lesson each week, children scramble to the tables to work on their “books.”  Their books are a few small sheets of paper stapled inside a brightly colored cover.  At this point in the year they are mostly drawing pictures and writing random letters.  Several have already “broken code,” which means they are beginning to understand the letter/sound correspondence.  Some can independently write words using invented spelling that is actually readable.  One by one each of the kindergarteners sits with a teacher to dictate their words so they can be written on the pages of their little books.

The first and second graders are equally passionate writers.  They jumped right into telling, then writing, short stories with a beginning, a middle that includes some sort of problem or challenge, and a solution at the end.  They’ve learned to make independent topic choices as well as how to select the type of paper best suited for individual stories.  Some are mostly drawing with a few words and others are already learning to edit for spelling and punctuation.  Once their writing is completed they often migrate to the “writer’s world” table to put finishing touches on their illustrations.  At this point, their books are all hand written, self-published first draft stories.  As the year goes on, the publication process will include more complex steps, depending on the individual child’s development.

The third and fourth graders began the year using storyboards to give structure to their personal narratives.  They also used storytelling to generate a topic list, set up their writer’s notebooks, learned the writing process stages, and just this week engaged in deep conversation about voice.  Each child has already published one small accordion book, and all are either finished or finishing up their first officially published personal narrative.  They are quickly making connections between their literature studies and their writing to begin reading like a writer.

Each group has its own endearing qualities.  I love how they’re taking ownership of the process and throwing around terminology they’ve heard the past six weeks.  When I read some of my own work to demonstrate voice, one third grader said, “The first version sounded like pre-writing to me.”  Another classmate later mentioned that my second version was “more pacific.”  My favorite encounter with a young writer this year, however, was with one of the kindergarteners just on the verge of breaking code.  One of the most enthusiastic Seed writers by far, she proudly showed me her completed book.  On the last page she had written D N.  I asked her to tell me about it.  She gave me that look and said, “D N…you know, the end!”  Undoubtedly, this will NOT be the end of my writing stories.  In fact, it seems like the floodgates have just opened.