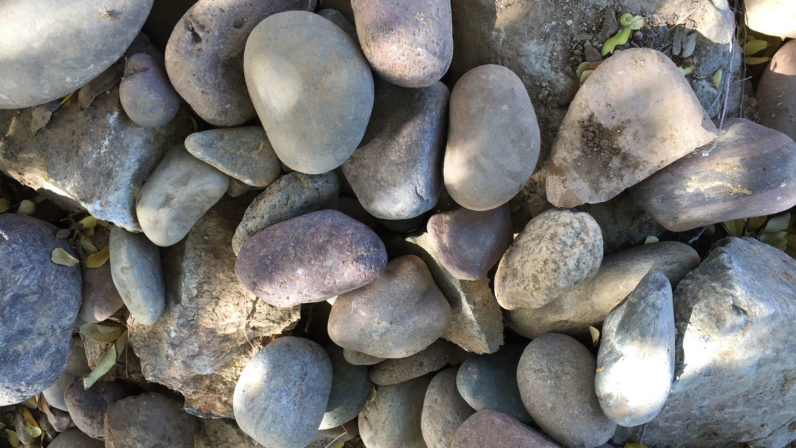 A Pile of Rocks

Years ago, while visiting a friend near Concord, Massachusetts, we took a day trip to Walden Pond.  I’ve been a fan of Thoreau since my teens, so standing in the space where he spent his two years, two months, and two days at Walden Pond was significant.  That day I soaked in the essence of the green woodlands and the calm, peaceful pond.  There were markers indicating the placement of Thoreau’s original cabin and pathways along which he may have walked.  What remained in my memory the most, though, was a pile of rocks.  Beneath the trees, close to where his cabin had been, there was a sign with these words from Thoreau:  “I went to the woods because I wished to live deliberately, to front only the essential facts of life.  And see if I could not learn what it had to teach and not, when I came to die, discover that I had not lived.”  Next to the sign was a large pile of rocks, which I learned was an accumulation of rocks left by visitors from all over the world.  Some had inscriptions or dates on them.  Each one represented a person who, for whatever reason, had come to visit this sacred area.  I added a rock to the pile, as someone who, like all the rest, had been deeply influenced by Thoreau’s life.  (http://thoreaufarm.org/2012/09/stone-advice-to-pilgrims/)

Soon the Seed will have its own rock pile, with a slightly different twist.  It will be a temporary pile that will eventually become part of our new school sign.  The sign, now in its beginning phase of permit applications, has a most unique design, with a metal mesh column that will be filled with river rocks.  We are inviting all of our current and alumni families to bring a rock to the Seed to be a part of the sign.

Once the Halloween carnival is over, we’ll begin collecting rocks.  They’ll need to be smooth river rocks, or rocks softened by ocean waves.  Each one should be generally the size of a potato and all colors are welcome.  I’m certain many will be Arizona rocks, and perhaps some will have a story of how they ended up at the Seed from other parts of the planet.  We’ll collect them just inside the front gate until they are installed inside the column.  Alumni families who will be attending the carnival are welcome to bring theirs that night.  If your rock has a story, please share it with us.

Just like the rocks at Walden Pond, our pile will represent many of those who have come and gone from the Seed, as well as our current children and families.  The rocks will be incorporated into our beautiful new sign that will mark the physical location of Awakening Seed.  The sign will be an expression of our love for the Seed, for each other and the planet, as well as a reminder to keep doing our work in the world.  In Thoreau’s words, “There is no remedy for love but to love more.”