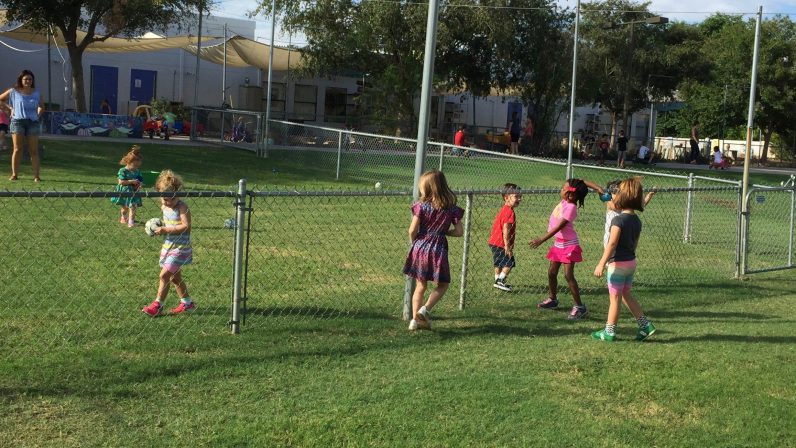 On the playground earlier this week, I noticed a group of children being super creative.  Standing near the toddler fence, several preschoolers and a first grader were tossing balls back and forth to the toddlers on the other side.  It was a simple game, yet it demonstrated the cohesive community that is forming between children of all ages, less than two months into our new school year.

One part of our community, less visible than the playground ball tossers, is our grandparent group.  We met on September 17, and filled an hour with introductions, a description of the Seed Halloween carnival, and conversation about the group’s purpose.  The group was a balanced mix of returning and new grandparents, all of whom seemed eager to be involved with their grandchild’s Seed education.  Aside from the school support, we emphasized opportunities for friendship between grandparents that the group offers, as well as occasions for service.  All in all, it seems that the grandparent community is off to a good start, too.

When the school year began, we had potential candidates for our APA (parent organization) leadership, but nothing was confirmed.  Normally, when we don’t have designated APA coordinators by August, I start to panic.  For some reason, this year was an exception.  I trusted that somehow it would all work out, and it did.  In the first week of school, two parents stepped up to take on the APA leadership, and it’s extraordinary what they’ve accomplished so far.   They have implemented new ideas for the carnival while honoring previous years’ traditions. It’s a delight working with them, and they are successfully bringing in others to make the carnival process a team effort.  I have no doubt that it will be an enjoyable and prosperous carnival and year for the APA.

In the first month of school we’ve had some staff members who have had to be gone for various reasons.  It’s not the easiest time to be away, as classrooms are establishing beginning-of-the-year practices and routines.  However, what I noticed during these times was a collection of individuals who stepped up to provide seamless care and instruction throughout the school.  The strength of our staff community is evident on a daily basis.  I know this year will continue to unfold beautifully, resting on the foundation of community upon which this 42nd year is built, that includes our students, their parents and grandparents, our parent organization, and staff.