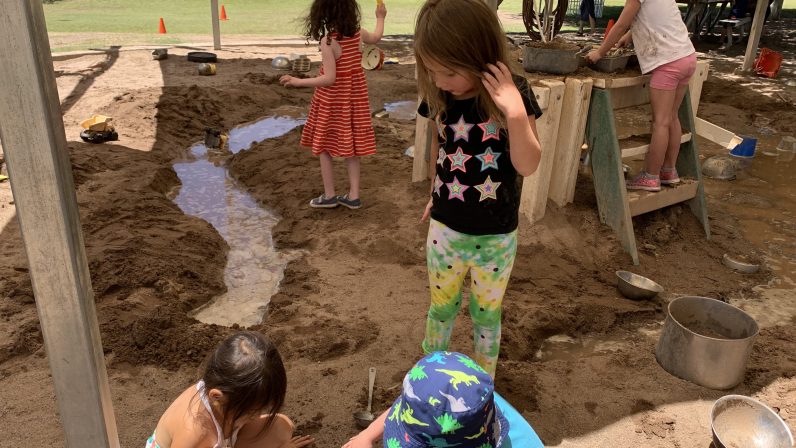 When visitors come to the Seed and we open the door to our playground, the response is nearly universal:  Wow.  One parent even asked if our school was adjacent to a city park.  Many express their awe by saying, “I wish I’d gone to a school like this when I was a kid.”  I’ve visited many schools over the years and, except for my friend’s nature school in rural Maine, I’ve never seen a playground quite like the Seed’s.  Especially in Phoenix.

The Seed playground is a laboratory in many respects.  It’s where kids have a chance to practice many of the skills they learn in their classrooms.  They practice sharing, taking turns, and working together.  If two kids want the same metal spoon, they have to either find another one or figure out a way to share the one they have.  When a group of children is working on digging a canal and a child wants to join in, they practice including by coming up with a job for the child.  This process may or may not require some adult assistance; however, the children are encouraged to do as much of it as they can on their own.

Creativity and imagination are at their finest on the playground.  Small groups of children can be found on the climbing structure taking imaginary trips together. They use language vividly, make wild gestures with their bodies, and run around in little packs along the perimeter of the playground as they bring to life a make believe world.  The two retired tractors provide no end of possibilities for adventure to imaginary worlds.

Sensory experiences abound in the sand circle through a combination of sand, water, mud, and natural items.  For children, this daily practice of sensory play helps them start their day grounded to the earth and themselves.  There are kids who literally begin every day with their hands in the mud.  Their bodies receive sensory input as the run, jump, and tumble in the grass.  Trips across the monkey bars develop strength, motor planning, and determination.  Additionally, confidence is nurtured as children master skills on the monkey bars and other climbing devices.

One of the most valuable aspects of Seed playground life is the sense of freedom children experience.  Although our teachers keep a watchful eye on the big picture and intervene quickly if there is a problem, space is given for kid to kid conversations to occur.  Children can choose which activities they want to do and where.  This is such a contrast to one school I visited where children weren’t allowed to play freely.  They had to use specific equipment for designated games, and there were no climbing structures.  In fact, the principal said, “We don’t have swings or climbing structures because we want everyone to be on the same level.”  Our playground is an ongoing invitation for freedom of expression, thought, and movement.

In the near future we’ll kick off a campaign to upgrade our playground.  It will happen in phases and include a new climbing structure for the big playground, as well as refinements to our toddler play area.  I plan to write about the need for this and the benefits.  I’ll also be reaching out to our Seed alums to share their playground stories.  It’s a collection of stories I look forward to hearing.