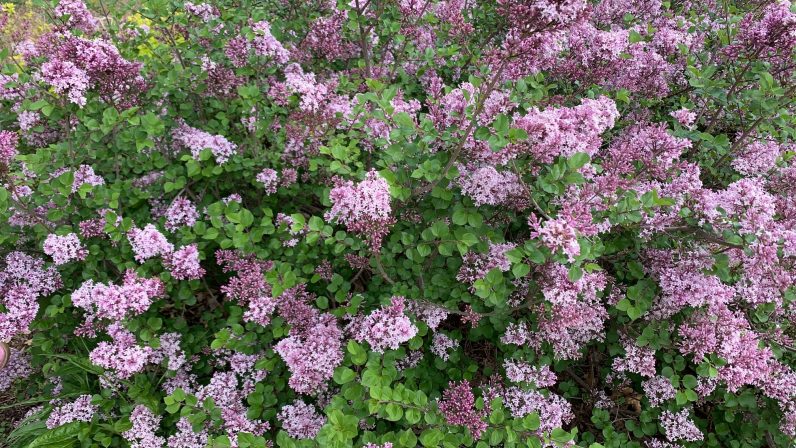 The Scent of Lilacs

You may have noticed I skipped last week’s blog.  I traveled to Nebraska to see my family, whom I hadn’t seen in over a year.  I was especially eager to see my parents who are now 96 and almost 93.  This past year has been hard on them, and I’m relieved that they are both now fully vaccinated.  They still live independently in their own home, with one exception—my dad has lost most of his vision.  Up until a couple months ago, he was still driving a car, which gave them considerable freedom.  Now he struggles to recognize faces and has to be extra careful on steps and in unfamiliar spaces.  While we were there, he enjoyed taking walks and sitting out in the back yard, watching the lawn he recently mowed himself being cared for by someone else.  Although he made strong efforts to maintain a positive attitude, I could tell it was hard on him.  Seeing my parents navigating this phase of their lives made me reflect on my own future.

Being in my hometown was a mixture of memories and life reflections.  Everywhere I turned, a memory appeared.  My grandmother’s big old house on the corner of 7th and Olive brought up one of my earliest memories when I was a two-year-old.  I went missing and the family found me running around on the flat porch roof.  I’d climbed a tall ladder leaning against the roof.  Further down Olive Avenue as I walked past my doctor’s former office, I recalled the day my mom sent my brother and me by ourselves to the doctor for our appointments.  When my brother figured out we were going to get shots, he took off, leaving me in the waiting room by myself.  In the cemetery close to town, my grandparents are buried.  Near their graves are two small monuments for my great-grandmother Ivy’s children who died in infancy.  I never knew Ivy, but somehow I’ve always felt connected to her.  She was a suffragette, and I often feel like the warrior in me at least partially came from her DNA.

The swimming pool was a highlight of our summers.  Our mom sent us to the pool by ourselves, where we’d lie on our towels in the sun, eating taffy and small wax pop bottles full of a sugary solution.  I remember how proud I was when I passed my test (swimming three consecutive widths of the pool) so I could be in the deep end independently.  Crossing over the bridge of the Little Blue brought memories of water skiing with our neighbors in the muddy river.  It was so narrow that we took a run, then dropped the rope so we could turn the boat around, eventually heading back the other direction.  The field behind our house holds more memories that I can share.  They are memories of catching snakes, mice, and lizards, building forts in all four seasons, and having total unsupervised time to play.  Although there was shadow side to the kind of freedom we were given, I mostly remember it as a foundational experience that eventually manifested as Awakening Seed.

Of all the memory invoking prompts, the scent of lilacs was the most significant.  Everywhere around town there were bushes of varied colors flowers, all with a scent that took me back to the springs of my youth.  Particularly, I returned to my last spring in rural Nebraska before graduating and heading out into the world.  I was so ready to leave, to begin my personal journey.  The base from which I grew launched me into a life vastly different from my roots.  Dipping back into that environment for a short time helped me see it through new eyes, bringing a fresh perspective for the work still before me, my work here at the Seed.