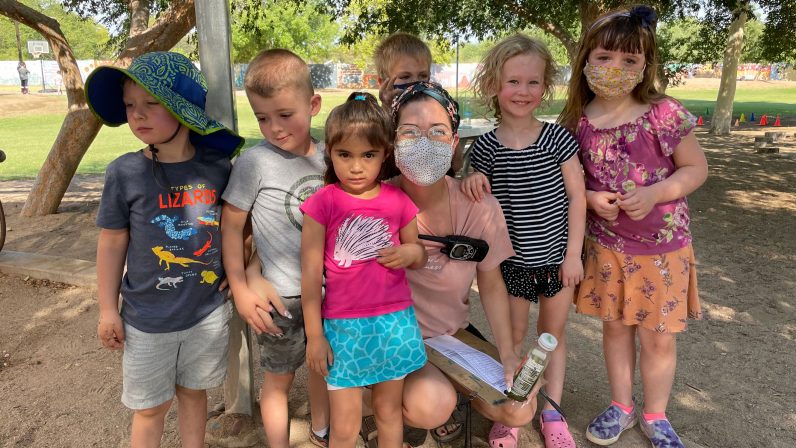 Why We Do This

Generally, I avoid writing about individuals with staff or students. I don’t want to give the appearance of showing favoritism in our tightly-knit community.  We’re a team, and everyone counts.  This week, however, we have a unique situation involving one of our staff members, and I couldn’t help myself.  Today is the last day for Sydney Catone, who has been a part of the Seed since she was three years old.

My first memory of Sydney was as a brown-eyed, curly haired three-year-old in our Preschool 3s class.  She was a lively, creative child, and what I remember most was that she was an outstanding artist at three.  I watched her grow up through the Seed, and when she was old enough, after moving on to other schools, she returned to us as a summer intern.  When Sydney went off to college, we hired her as an assistant in our summer program.  Somewhere along the way, she switched her major to education, eventually earning her bachelor’s degree in elementary education with a minor in ESL (English as a Second Language) in December 2020 from the University of Arizona.  Among other things, Sydney is working on her master’s degree from Northern Arizona University in early childhood special education.  Her estimated completion date is May 2022.

Somehow this spring we received news that Sydney was in town and available to sub.  We contacted her and, although she was committed to two other jobs, Sydney graciously made room in her schedule to work several days a week for us.  Looking back on the spring, I don’t know how we would have made it through those months without her.

We’ve enjoyed Sydney’s presence during our 2021 summer camp, and we are sad to see her go.  At the same time, we’re excited for her as she leaves for her grand adventure in Austin, Texas.  Sydney will be teaching a PreK class in a charter school there in the fall.  This morning as I was thinking about her leaving, it came to me that raising students like Sydney, then launching them out into the world, is why we do this work.  She and other students who have come and gone from the Seed, will carry every bit of their Awakening Seed experience with them and share it with new friends, students, and communities.  Bill Glover once said, “The Seed is wherever a Seed is.”  There is no truer example of this than this moment of releasing Sydney to the world.