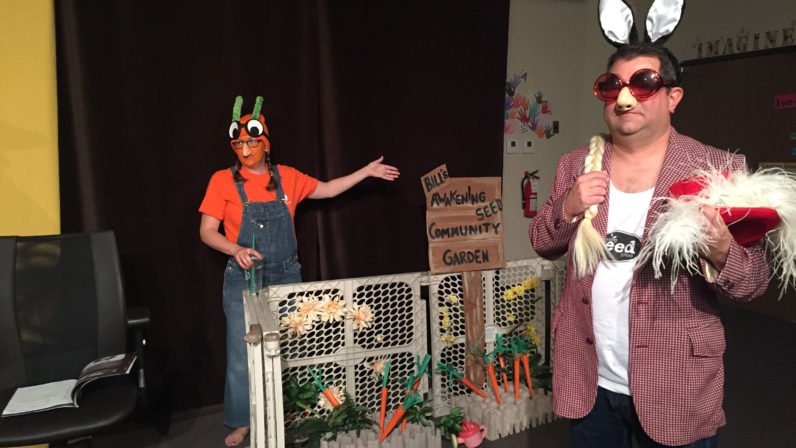 Without fail, the same thing occurs between our September teacher work day and the annual Seed Halloween carnival.  Regardless of who’s on the staff, it happens every year.   It involves wacky costumes, glasses with noses, ridiculous jokes, creativity, and imagination.  It’s a tradition that dates back to circa 1986, called the Mystery Theater.  Started by Mike and Kathy Shores, two Seed teachers, the Mystery Theater was originally created to add an extra fun activity to the carnival.  Since that time, it’s become one of the Seed’s most beloved and widely anticipated experiences of the entire school year.  Alumni families come back to the carnival year after year just to take in another show.  For the past several years, the proceeds from the play go to the Seed Faculty Retirement Fund.  The Mystery Theater players keep making it happen.

Here’s how it works.  We meet on the teacher work day and go through a stack of books.  Themes that could go along with Halloween are taken into consideration, as well as the number of characters/number of players available, and what kind of stunts could be incorporated.  At times there are side conversations prior to the meeting, especially if one player is lobbying for a specific theme.  Once the book is selected, we choose parts and set up our rehearsal schedule.   Any staff member is welcome to participate and some years we’ve also included Seed parents and alums.

We begin by meeting once or twice a week to write the script (loosely adapted from the book), until the last week prior to the carnival when we rehearse almost every day.  It’s rare to have everyone present at each rehearsal.  In fact, several years the only time the whole cast showed up was for the dress rehearsal the night before the carnival.  This year the script has been written mostly by three or four different people at a time.  We have about a week left before the carnival and we’ve just barely begun blocking it out.  It’s the time when we kick into high gear.  The hilarity of the process sustains us.

This year’s performance is Zombie in Love adapted from the book by Kelly DiPucchio.  It’s an endearing story, greatly altered to include current events and Seed humor, about a lonely zombie looking for love.  Along the way he meets some extraordinary characters.  We guarantee it will have a happy ending and not be scary.  The Mystery Theater players make it a point of including a little humor for everyone and we always hope our audiences think it is as funny as we do.  Enjoying making people laugh is a common passion for all MT players and it’s what keeps us coming back year after year.  On more than one occasion some of us have said, right before the first show each year, that we live all year for that single moment.  It’s the performing and it’s also something more.  There is a certain intrigue and trust around the way the process works.  I know it sounds cliché, but it really is a mystery how it all happens, and I’m glad to be a part of it once again.  I hope you’ll be in the audience to share in this unique Seed experience.