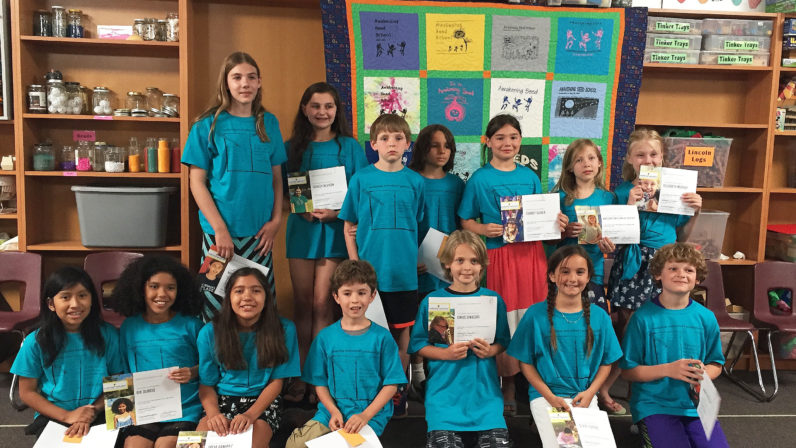 Some things will simply not be denied.  Although it’s hard to believe, on Wednesday we  finished our 40th year and added fourteen more graduates to our alumni population.  Since it’s a multiage class, a few will be returning for their 4th grade year in August.  The rest will be scattered into the world to find their way and spread the essence of Awakening Seed to the rest of the planet.  This year’s graduating class is both tender-hearted and tenacious.  They are respectful and have strong voices, which they have no hesitation using.  I experienced this firsthand on Monday.

Several months ago, I saw the movie Rock Dog.  The ending song, “Glorious,” grabbed my attention.  Written by Adam Friedman, it was a perfect graduation song and reminded me of this group.  I sent the link to Jay, our music teacher, and didn’t think about it again until last week when I realized we hadn’t started practicing the graduation songs.  The class was busy with their musical production so graduation wasn’t at the top of the priority list at that point.  He played the song for them during their final music class.  Jay sent me the chords and lyrics over the weekend and my task was to practice with the class.  It was an ambitious endeavor.

On Monday morning I was feeling overwhelmed by all we had to accomplish in the next two days, especially learning a new song.  Time was limited and I didn’t want to cut into the fun activities planned for their last moments together.  It seemed like a good idea to just sing the two songs we knew and forget about “Glorious.”  I made my case to them, logically laying out options that included doing the two songs we knew, singing the two songs and adding a song they already knew…and the third option was learning “Glorious” to add to the familiar two.  They respectfully listened to my pitch and offered their own suggestions.  Some were more vocal than others.  After a thoughtful conversation, we held a vote with everyone placing their choice on a small piece of paper.  The final count came in and “Glorious” won hands down.

Using my iPhone, we found the link on YouTube and started practicing.  To my surprise, most of the kids were already familiar with the tune and lyrics.  I commented on this and one of the quieter students said, “Actually a lot of us already know it.”  As it turned out, many of them had spent the weekend singing along in their cars, at home, and any other place they could get their hands on an electronic device.  When I heard that, I knew they’d be glorious in their singing, and they were.

On Wednesday afternoon, they stood proudly in front of an adoring crowd and sang their hearts out:

It was a perfect ending for this class filled with confidence, joy, determination, and hope.  It’s been an honor to be a part of their lives and I know the world will be enhanced by their presence wherever they roam.