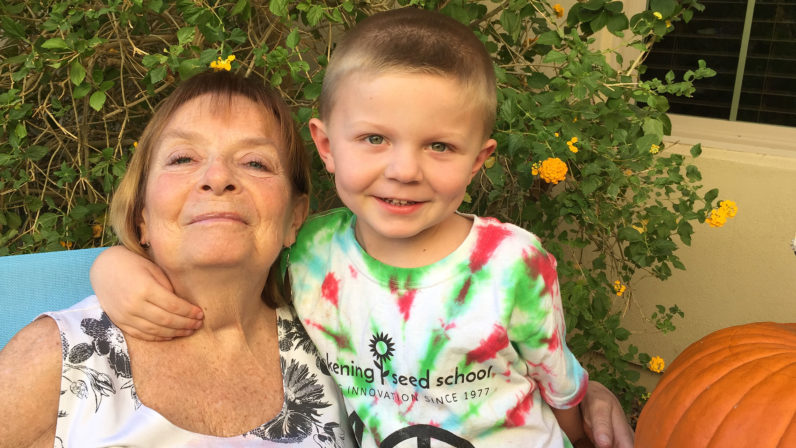 It’s not my regular practice to write about individuals.  I prefer to write about our Seed community, about the relationships and dynamics that keep the school a vital, living entity.  Nevertheless, from time to time, a specific person catches my attention.  When you hear her story, I think you’ll understand why this week’s blog is about Mary Snow Sidelinger.

I first became aware of Mary in the spring of 2016.  We were holding an open APA meeting to wrap up the year, and to prepare handing over the leadership to a new coordinator.  A few minutes into the meeting, a quiet woman entered and stood respectfully at the back of the room.  At one point I invited her to sit down, but she chose to remain standing.  The meeting ended, and we all went our own ways.  Within a day or two, the woman’s daughter, one of our parents, approached me and said her mother, Mary Sidelinger, wanted to get involved but wasn’t sure how to make that happen.  I followed up on the situation by engaging in a conversation with Mary at our end of the year celebration.  Soon after that, the idea for a grandparents group was born.

Mary told me she had recently moved to Arizona with her daughter, son-in-law, and her two-year-old grandson.  While she loved being with her family in the sunny Arizona climate, she missed her friends back in Maine. Mary’s words stayed with me, and I realized we had a whole part of our Seed community that needed some attention, our grandparents.  Over the summer I started organizing ideas and set a date for our first gathering of the grandparents. I hoped we’d have 20, and in the end we had 39 grandparents in attendance.  (https://www.awakeningseedschool.org/2016/09/grandparents-grow-circle/)  It was the beginning of something quite extraordinary.

Throughout the entire 2016-2017 school year, the grandparent group thrived.  In addition to offering much appreciated support with school events, grandparents made friends with each other, did volunteer service outside of the Seed, and engaged in conversations about topics like self-care.  One of our grandparents was even invited to be a speaker at our 40th anniversary celebration.  Throughout this year, Mary Sidelinger was a regular, always with a big smile on her face.

When we came back after summer break, Mary’s daughter asked me if I’d heard what happened to Mary.  While vacationing in Hawaii, Mary contracted a flesh eating bacteria through a small cut on her leg.   Within 48 hours she was in the ER. Several surgeries later, the doctors were still unsure if she would survive.  Mary did survive, in large part due to her grandson.  “My time with Kaiden wasn’t done yet.  I wanted to watch him grow up, graduate from high school…I’m grateful to be alive.  I love living life, and I’m not ready to leave this world.”

Many challenges still lie ahead for Mary with her leg’s rehabilitation.  On top of that, their family will be moving back to the east coast in a month or two.  “I have loved my time in Arizona; the Seed is amazing for children.  It makes me sad to leave, but it’s what’s best for our family, at least for now.”  I reminded her what a significant contribution she made to the Seed by inspiring the grandparents group.  “The real work has been done by other grandparents, many of them like me, who already play a large part in the daily care and lives of their grandchildren and had a desire to make a difference in their school community as well.”  Knowing Mary for the short time we’ve had has been an honor and inspiration.  What she has given the Seed will continue to serve our community and be appreciated by many, for years and years to come.