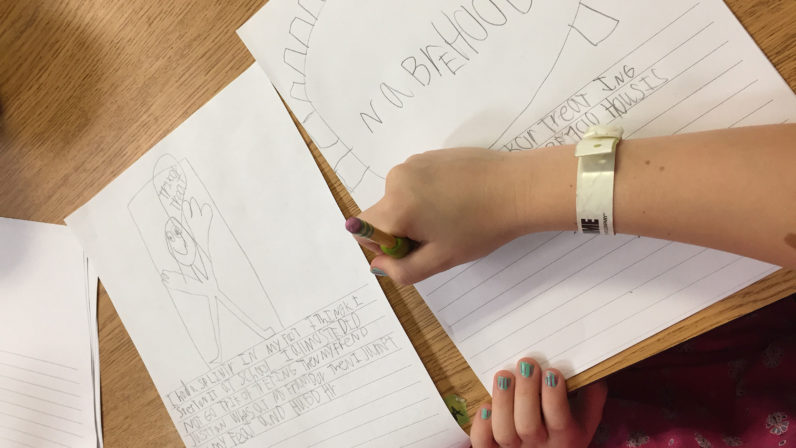 I’ve had a relationship with invented spelling since I started teaching in 1977.  Particularly during the 1980s when writing workshop in schools was spreading all over the country, invented spelling has played a big role in the lives of Seed writers and teachers. “Invented spelling, sometimes referred to as inventive spelling, is the practice of spelling unfamiliar words by making an educated guess as to the correct spelling based on the writer’s existing phonetic knowledge.”  (http://grammar.yourdictionary.com/spelling-and-word-lists/invented-spelling.html)  In other words, at the same time children are learning their letters and sounds, they can also be writers.

Use of invented spelling frees up young writers to tell their stories without everything having to be spelled perfectly.   If conventional spelling is required of young children, several things happen:

Over the years we’ve consistently encouraged children to use invented spelling.  We give them resources to look up words, and also suggest that they give it their best guess first so they can keep writing, then do the spelling corrections later.  This helps children build confidence in themselves and trust what they know.  Often they’ll be provided an alphabet chart when they are still learning to form letters.  I can’t think of too many milestones that are more exciting than when a child “breaks code.” This is when a student makes the connection between the letters they are writing and the sounds they hear in words.

Early writers, usually in kindergarten, begin by mostly spelling with consonants, such as “WT” for “went” or  “HRS” for “horse.”  As they learn vowel sounds, they write “BOT” for “boat.”  By 1st or 2nd grade, they begin to have the confidence to write “NABREHOOD” for “neighborhood.” While this extraordinary process is taking place, teachers model conventional spelling through chart writing, lists, signs posted around the room, and lessons designed to promote the connection between spelling and writing.  In the early stages, teachers take notes (sometimes called underwriting) on the child’s written page, so both the child and teacher can remember what the intended invented spelling represents.

Invented spelling requires trust between the child and adult.  The next time an emerging writer asks how to spell a word, say this:  “What sounds do you hear?”  If the child is close, say, “Write that down.”  If not, repeat the word slowly, emphasizing the beginning sound.  With time and practice, the child will gain confidence and, more than likely, you’ll experience an avalanche of writing from another emerging author.

In addition to providing a wealth of information about each child’s grasp of written language, encouraging children as writers helps strengthen their voices and confidence.  If you’re interested in seeing invented spelling in action, consider visiting your child’s writing workshop.  If you’d like to read more about it, check out these links: