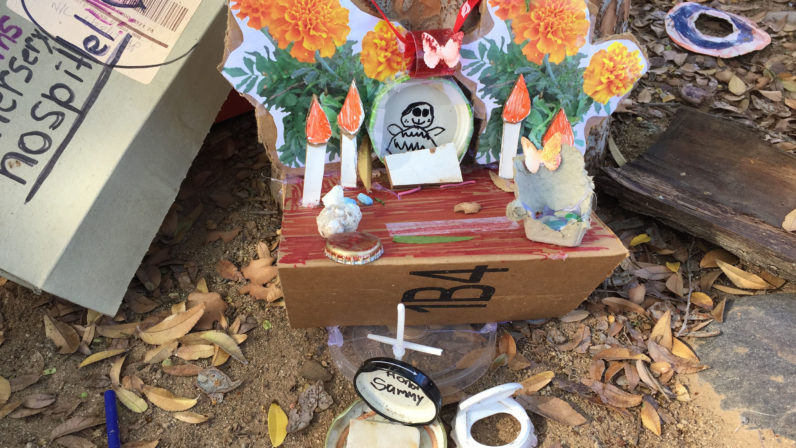 The little altar under the tree caught my eye.  I saw it on my way out to Gwen’s Castle with the 3rd/4th graders the morning after Halloween.  We were headed to the castle as part of Día de Los Muertos, Day of the Dead.  For several weeks, many classes have been learning about this time of celebration from Diane, our Spanish teacher.  They’ve learned that it’s a time of remembrance of those who have passed on from this world.

Each of the 3rd/4th graders wrote a piece about a deceased family member, and we decided Gwen’s Castle would be a good place to share their stories, particularly since one child wrote about his older sister Gwen, to whom the castle is dedicated.  (https://www.awakeningseedschool.org/2011/04/a-castle-for-gwen/)  As we sat under the trees, one by one each child briefly talked about his/her ancestor.  It felt honoring of both the writers and their subjects.  On our way back into the building, we paused by the tiny altar so I could ask its creators about it.

“It’s an ofrenda, Mary.  We learned it from Diane.”  They went on to explain that “ofrenda” means offering in Spanish.  An ofrenda often takes the form of an altar during Día de Los Muertos.  After educating me about their altar, they continued by telling me that their ofrenda was created in memory of Sammy, one of the girls’ rock pets that suddenly disappeared and never returned.  I was taken aback by their attention to detail, including paper candles and pictures of traditional marigolds. It was a sweet, beautiful expression of both their imaginations and their learning.

As we returned to the classroom, I noticed the Preschool 4s room was overflowing with families who’d come for a Día de Los Muertos celebration.  Part of their celebration was an ofrenda they’d made with photos and the children’s art of their deceased relatives (and a couple pets).  Another teacher explained how their class had held a sharing time to celebrate the writing they’d done about their ancestors. And just as I was writing this post, a parent sent me photos from their home Día de Los Muertos celebration.

Each of these threads of celebration, from the classroom to its translation beyond the walls of the school, is about ownership and expression.  When children have access to materials and time for play, they show us the depth of what they know.  When families feel they belong to something that honors who they are, they embrace what their children are learning and weave it into their family’s life.  From my completely biased perspective, I believe this is one of the many things that makes the Seed special.