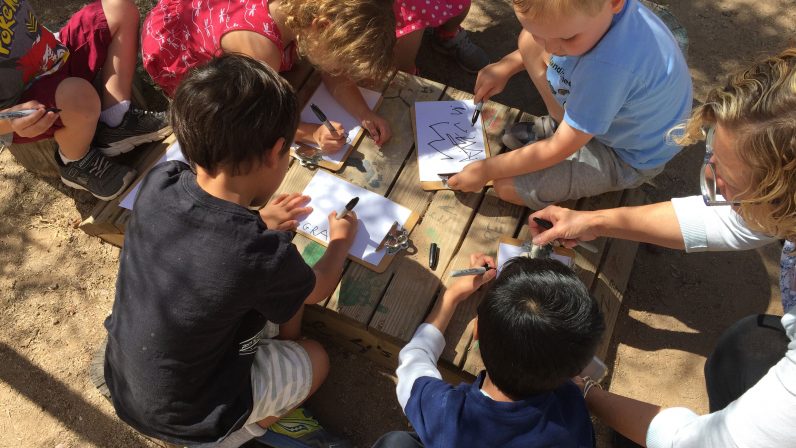 Having been an artist my whole life, making marks on the page is important to me. Recently I was discussing the drawing of young children with Deb, our Preschool 4s teacher. We were talking about the importance of children having a drawing practice and how to support them in this process. I volunteered to come in for a few minutes and offer an invitation. When I went into the classroom I brought a jar of water with a section of aloe vera freshly extracted from one of our outdoor areas. We gathered in a circle and I set the jar in front of them so all could see it. I asked the children what they saw, and they took turns sharing their observations. As each idea was spoken, I added it to an emerging drawing on the whiteboard easel. I kept asking what else they noticed and they kept finding new details. Their focused attention was impressive.

When the drawing held as many details as possible, each child took a small clipboard with a piece of paper and a marker outside.  They were invited to draw any plant they wanted, using their finely tuned observation skills. What happened after that seemed magical. They quickly found their chosen plants and started in on their drawings. A dedicated group gathered on the wooden bridge, using it as their artist’s desk. One girl sat off by herself, using her keen artist’s eye to draw the potted cactus in front of her.  She took her time adding specific components of the cactus onto her paper, absorbed in her drawing well beyond the time others took to complete theirs. A pair of boys decided to draw plants in the garden, so they situated themselves on the sidewalk beside it. They drew the small green onions in different ways. One made them as straight lines (side view), and the other child drew them as black dots, choosing the bird’s eye view instead. Yet another child drew carrots with roots, saying his drawing was “underground growing.”

The preschoolers stayed with this activity far longer than I anticipated. As they worked diligently on their drawings I was touched by the teachers as well. They both wove in and out of quiet, reflective conversations with children, asking relevant questions and encouraging these young artists. They approached the children respectfully, joining the children where they were, without an agenda. The whole scenario felt authentic, inspiring, and honoring. It made me want to be a part of further explorations with these children.

Later as I was reflecting on the experience, I started looking up resources about children’s drawings. I found articles that describe the benefits of drawing in nurturing children’s development.  I discovered a new term, “transdisciplinary,” which, according to blogger Debi Keyte-Hartland “differs from interdisciplinary and multi-disciplinary [approaches] in that it is not just about connecting and combining different academic subjects at the same time but is more about what happens when you do, what difference [it makes], and what [it is] that is new, that arises from it.” She describes it as “learning within a living system.”

As I dug deeper into Keyte-Hartland’s writing, I discovered this wonderful quote by Loris Malaguzzi, founder of the Reggio Emilia educational approach: “In other words we have started on a journey to the source of children’s thinking.” I can’t help but think that venturing deeper into the world of children’s drawings, alongside their teachers who are already engaged in deep noticing, will be a direct path to that extraordinary source of children’s thinking that will inform the direction of our practice as educators in years to come.