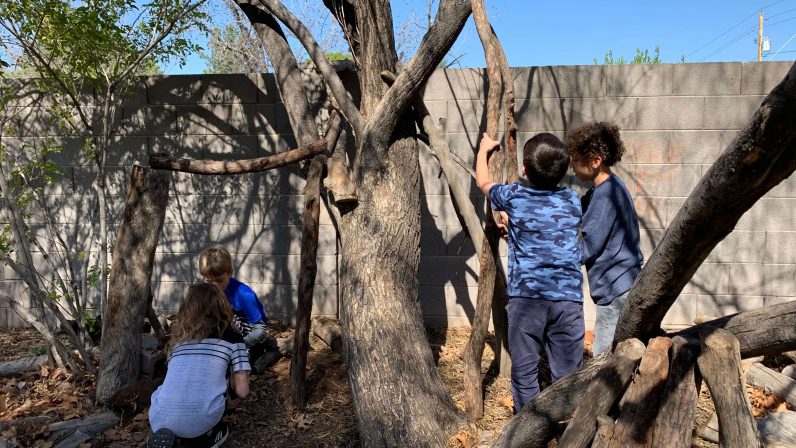 During second recess when elementary kids are on the playground, most of the older students elect to play sports.  On Monday, due to a staffing shift that day, it ended up being a free choice recess.  Several of the 3rd and 4th grade boys headed off to Gwen’s Castle.  They decided to rebuild a fort they’d constructed awhile ago.  First they examined the current location, which was under a tree outside of the castle, and decided to move all of the bigger logs close to that space.  Once they assembled a large pile, they decided that the best spot for rebuilding was in Gwen’s Castle under a tree.  So they moved all the logs back into the castle.  Just as that phase was beginning, one boy quietly stated, “Wait. We need bringers and builders.”  In other words, he could see they needed a plan for what would happen with the logs.  Soon.

Within minutes, somehow a plan emerged.  One boy scurried up the tree and scoped out the best places on the tree to rest the supporting logs.  He suggested placing a short log from the tree to the top of the brick wall nearby to serve as a support.  There was ongoing negotiation as each log found a place.  A couple kids created a precariously balanced opening for the future dwelling.

The bell rang before this project was completed.  Plus, at the same time I was beckoned by a kindergartener to a location just outside of Gwen’s Castle to “make a video” of a colony of ants hauling an insect (most likely a crane fly) much larger than they were to an unidentified location.  It was a lot of activity to assimilate in a short time.    As I returned to my office I was super impressed with the astute kindergarten observers.  I felt happy for them that they have the natural world at their fingertips to explore and use as a laboratory.

Thinking about the “builders and bringers,” our playground served as a different kind of laboratory for them on this particular day.  It was a chance to put important life skills into practice through a project they fully initiated, visualized, and put into action.  They negotiated roles, listened to each others’ ideas, and compromised when necessary.  It was a time for them to put into use all the collaboration skills they’ve been taught at the Seed since they were very young.  I believe that an accumulation of these experiences will serve as a foundation they’ll carry with them into their years beyond the Seed.  It will be a foundation built from  memories of a time when they knew their ideas mattered, in a place where they were encouraged to make them happen.