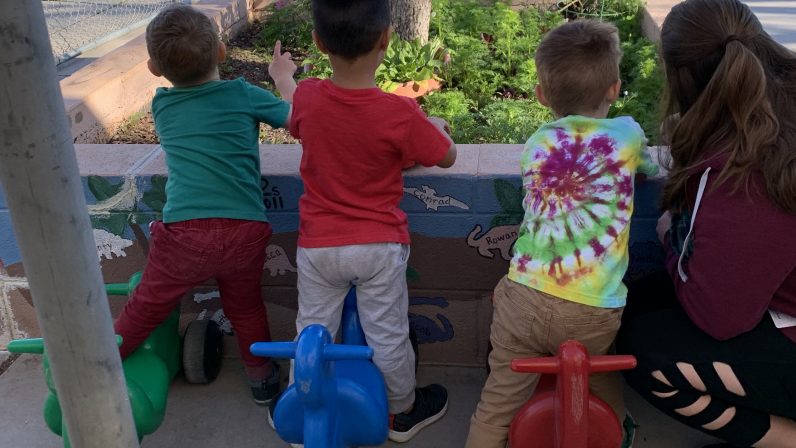 Over the past several weeks I’ve been writing about the playground.  I’ve described its activities, life lessons available, and all the reasons we place so much emphasis on our  extraordinary playground.  When I saw these three toddlers gazing out onto the big playground with a student intern the other day, with their similar bikes parked identically behind them, I became aware of yet another theme emerging from our playground.  Comradeship.  Even our young toddlers begin to experience a sense of it as they ride their bikes together, dig in the sand, and establish their place among peers.  As they grow older, it’s likely that they won’t remember specifics of their toddler moments together, although the seeds of belonging grow from this foundation.

A few weeks ago I posted a request on social media for our alumni Seeds to share any memories they had of their time on the playground.  Quite a few responded.  They seemed quite varied, although after I saw the three toddlers standing with their bikes together gazing out onto the playground, the common theme emerged.  Here are the memories of comradeship from our former Seeds:

The mother of an avid basketball player wrote that he and his friend were “dunking and the hoop came crashing down. Bill called them into the office and they thought they were in big trouble, but he really just wanted to take a picture of [them] with the hoop to send to me.”  Her second memory was of her son “as a wee toddler breaking out of the toddler playground to go out into the big playground. I think Bill fixed the gate but [he] figured it out, broke out again, and escaped to the big playground the next day.”  Evidently, his comrades were on the big playground!

Some students had memories of engaging in specific activities with certain equipment.  A popular  piece of equipment for one person was the tire bridge.  One student wrote:  “I remember rolling Tonka trucks and barrels. And possibly putting people in the barrels and rolling them around:)  And lots of climbing. It was a magical time.”  Another girl responded with this succinct statement:  “It’s so simple I can hashtag it…#alwayssiftingsand.”  I remember children often sitting together in the sand with their strainers, which were sometimes called “sand softers,” making soft sand as they chatted away.  The sifting and the conversations were calming and pleasurable, especially shared with a friend.

A few alums had memories of detailed imaginary games, some based on real life experiences or events.  Here is one student’s account:  “There was a super bowl and one kid was very pro the orange and blue team so we made signs and had a march. Another kid was very pro the red and gold team and was upset by this. So we made more signs and had another march. I only remember the colors because we made so many signs. I just googled it and it was Broncos 49’ers in 1990. Color memory!”  Another girl reported this game:  “we wanted to play something like ‘cops and robbers’ but were told it was too violent. Instead we invented a game called ‘cha cha crabs,’ which had essentially the same rules except it involved crabs and dolphins (the dolphins were the ‘cops’ and would corral the crabs in coral groves or something).  In retrospect it was a much better game.”

One of my favorite stories came from a current parent who was a Seed.  This is what she said:  “We played Star Wars. I always wanted to be Leia. [My son] plays the same game today at the Seed.”  I love the idea of a game being passed down from one generation of comrades to another.  A final comment that was posted summarized a student’s memory of being on the Seed playground:  “Aww. I surely remember this time in our lives.”  Most definitely the activities were an important part of their memories; however, the fact that they happened with friends added a long lasting quality to what they remembered.  Comradeship happened long ago and is still thriving on the Seed playground.