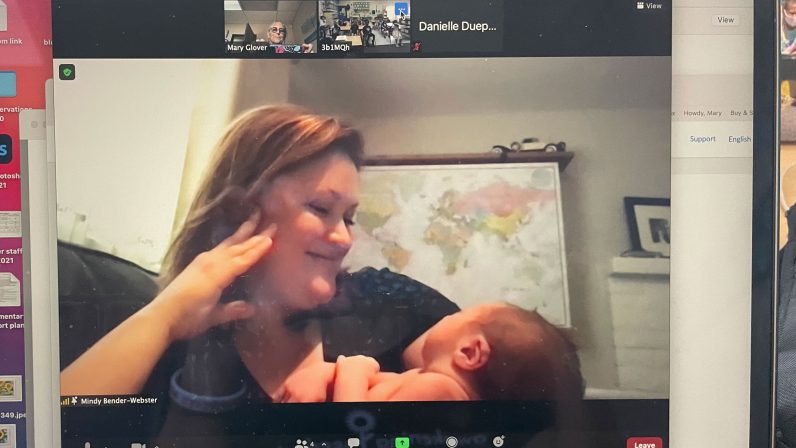 As rain fell on Wednesday morning, we scrambled to set up morning recess alternatives until the storm let up.  Once that was settled, I checked in with all of the lead teachers to gather information about the various studies they’d undertaken these past six weeks.   Topics varied widely and included dinosaurs, pirates, families, camping, ocean animals, pet hospitals, desert creatures and plants, volcanoes, layers of the earth,  book making, composition of an original song, and drumming circles with plastic paint buckets.  The most exciting topic of this week, especially in the K-1 class, was the birth of Mindy’s baby, Remy Dice Webster, on Tuesday morning.  Many children were in Mindy’s PreK class for the entire school year and had closely monitored the progress of her pregnancy throughout its entirety.  It wasn’t completely a surprise that just 24 hours after giving birth, Mindy offered to hold a Zoom session to introduce the kids to Remy.

We signed on for the Zoom session to meet Remy right after lunch while the class had their popsicles.  Mindy was warm and eager to share her newest family member.  She showed her students that Remy was wearing only a diaper and talked about the importance of his skin coming in contact with hers in these first days of his life.  She told them he was 21.5 inches long at birth, so Kerri, who was with the class, pulled out a yardstick for a visual reference.  When Mindy pointed out his feet, a tape measure in their home was requested for an exact measurement.  Three inches.

Kerri suggested that some of the kids might want to ask questions.  One by one everyone who had a question was able to ask it.  One child asked about the baby’s eye color.  When Mindy pointed out Remy’s umbilical cord, there were LOTS of questions and observations.  She brilliantly described the placenta as a special kind of lunch bag inside her body that was connected by a tube to the baby.  She went on to explain, “The cord was inside me, and my food turned into food he could eat through the tube.”  She showed them the clamp on his umbilical cord and said it’s the same for everyone the way it heals (except that some belly buttons go inward on the belly and others are more outward).

After their umbilical cord questions were satisfied, the questions turned to Remy’s tiny fingernails and toes.  One child asked if he was bald when he was born.  Mindy showed us how much hair he has on his head, and said he even has a hairy back and shoulders.  Kerri kept facilitating the session, making sure all questions were answered.  A student wondered when the tube to the umbilical cord was connected, and if it happened before or after Mindy was pregnant.  Another child wanted to know how much sleep Mindy had after the baby was born.

The Q & A session continued for around thirty minutes.  It was quite an exchange between two incredibly skilled teachers, both of whom spend their days cultivating the natural curiosity of their students.  They both model and inspire deep, meaningful language and thinking.  The interplay between them was magical, and I felt so privileged to have witnessed it, in addition to being present for Remy’s first introduction to some of the children who have been a part of his mama’s life.  It was an open, honest, age appropriate conversation that will undoubtedly raise other questions in the days to come.  I look forward to hearing about them.