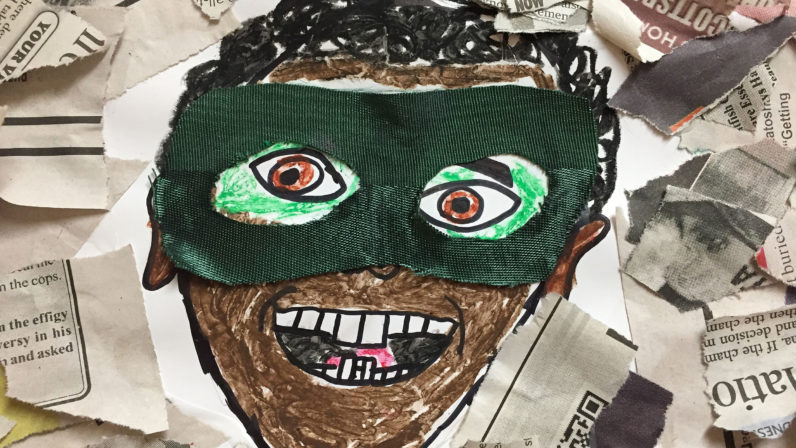 Hot Lava with My Eyes

During week four of summer art camp, all classes explored what it means to be a super hero.  Words like courage and bravery popped up everywhere.  Toddlers focused on trying new things, including foods.  They walked on the balance beam and climbed to new heights on the playground structures.  Capes and sparkly crowns were prevalent in preschool classes, as children talked about and listed their super heroes.  Preschool 3s students came up with this list:  Spiderman, Mommy, Superman, Blaze the Monster Truck, Elsa, fire fighters, and police officers.  One child even mentioned his baby brother who “saved my momma’s glasses.”

3rd-6th grade students examined the work of street artist Shepherd Fairey (https://en.wikipedia.org/wiki/Barack_Obama_%22Hope%22_poster) who created the famous “Hope” poster that became a symbol of Obama’s 2008 campaign.  They each painted a canvas with their own face on it, using specific color requirements, a background of geometric shapes, and a single word expressing a personal quality.  Our 1st and 2nd graders focused on bravery and made two sets of self-portraits with quotes about their own brave experiences.  Here are a few examples:

• I went camping at the forest for Boy Scouts and saw a bear and had to be brave.
• Speaking up to somebody bigger than me makes me feel brave.
• I felt brave when I started camps and clubs and I didn’t know anyone.  I made friends.
• When I try to protect something and go against something that I’ve never gone against, I feel brave.

Attached to the self-portrait of an exceptionally talented young artist, one statement stood out from the rest:  “I can create hot lava with my eyes.”  As I gazed at his lava-making eyes peering from behind a green mask,  I wondered about that lava.   Maybe it’s literally molten rock; perhaps it could be more.  I like to think it’s a super hero’s commitment to bringing justice to all the world, no matter what it takes.  I believe we have a whole school full of such heroes.