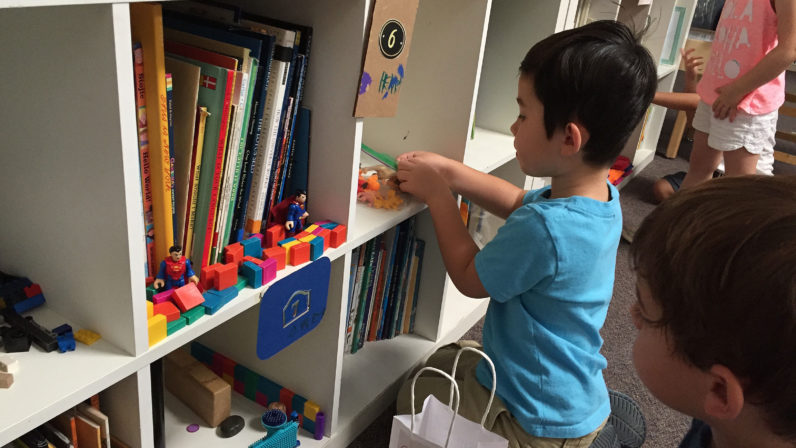 Action figures arrived from home in sets of five.  As the week unfolded, those same figures brought acceptance and respect alive in a whole new way.  Over the weekend their teacher cleared enough cubicles for each child to have a personal space.  Before long, the classroom looked like a colony of condos.  Toys, blocks, and natural objects from around the room were made available.  Each child had a small “shopping bag” for such items with a number on it to match the one on his or her space.  An idea table was set up where students could go for supplies and advice on how to make something they envisioned, such as a pool with a diving board.  Some condos expanded from one to four floors in less than a day.  Group rules evolved, such as “ask first” or “put stuff back when you’re finished using it.”  By the end of the week, a community road was under construction, unifying the neighborhood.

What made this project remarkable was how social learning was integrated into the entire experience.  To make it work, everyone had to be a better listener, be more generous, and keep the needs of the whole community in mind.  One reason it worked so well was that from the very onset, the children maintained ownership.  Furthermore, they were given big chunks of time for the work to evolve.  Although they’ll move on to a different topic next week, the Preschool 4s will undoubtedly maintain their thriving community in the weeks to come.

In other parts of the Seed, equally impressive work has transpired.  Toddlers learned about sharing space by crawling into a large cardboard box together.  Throughout the week they added splashes of color to the box, as they practiced taking turns and remembering not to climb on top of the box when friends were inside.  Preschoolers constructed tents and loved having the entire class gathered under the blankets, pretending to be bears and snakes.

The kindergarteners converted several large cardboard boxes into apartment buildings.  Their buildings had windows with children’s pictures looking out into the world.  Beside the windows were fire escape ladders.  Toward the end of the week each child made a small clothespin doll with accessories, all of which fit inside a repurposed Altoid box.  I noticed a few of the dolls visiting the apartment buildings.

First and second grade students made beautiful collaged houses full of texture and bright colors.  They are displayed in the hallway with a sign above them that reads, “Village of Kindness.”  Third through sixth graders worked on floor plans for animal sanctuaries and club houses.  They also engaged in a social experience with peers that involved collaboration.  Working with classmates who might not be their first choice for friendship, they had to reach consensus on a name for their group, their rules, and fort design.  As the week progressed, their ability to work cohesively also grew.

On Friday morning, as the week was winding down, one of our Seed alums and her mom stopped by the school.  I showed them around our outdoor space as kids of all ages enjoyed water play.  They were both in awe of how the school has grown, especially the trees.  Toward the end of their visit, the mom said, “I think if every child could go to Awakening Seed our world wouldn’t have the problems it has.”  I agree.  This week has most definitely moved us closer to a world more populated with humans who care about social justice.