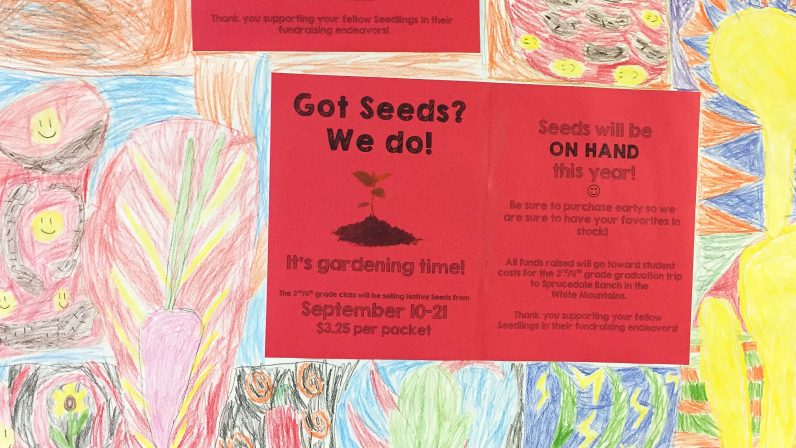 It was a plane that derailed my plans for this week’s blog.  I fully intended to describe the many wonderful food experiences happening around the Seed as part of our school-wide nutrition study.  I was going to write about the incredible smells, the scent of pizza, beans, and pesto that permeated the hallway.  I aimed to mention the K-1 discussion of roughage, enhanced by the book, Everyone Poops by Taro Gomi.  My plan also included describing the 3rd/4th graders’ annual seed sale, this year featuring seeds from Native Seeds/SEARCH, a Tucson-based organization dedicated to conserving and distributing seeds from the southwest US and northwestern Mexico.  There was plenty of material available to fill a couple blog posts.

Everything shifted, though, when I took a pre-sunrise hike on South Mountain.  As I scrambled up the rocks, I paused for a rest and a drink of water.  Looking out over the valley toward Sky Harbor, I noticed a plane approaching to land.  In an instant I was carried back to this morning seventeen years ago.  September 11, 2001.  That morning I arrived at school and was bombarded with safety questions.  When I first learned that the Twin Towers had been hit by an airplane, I was concerned about the Seed’s close proximity to the airport.  It was only a slight comfort when we heard that all the planes had been grounded.  Everyone wanted to know if we were safe at the Seed, and I was at a loss as far as how to respond.  Some parents kept their kids home, and others brought their children and themselves to the school because they felt like it was a safe haven.  I remember the quiet skies, and how deeply I felt the weight of responsibility.

We got through that time by being as fully present to our students and families, and each other, as we could.  Most of our students were too young to know what was going on, and for the ones who were aware of what had happened, we talked about what we could do to help out.  Staff and students organized a bake sale to raise money for the Red Cross.  My 4th/5th graders asked to start saying the Pledge of Allegiance every day.  We learned about Afghanistan.  It was a time that involved a lot of making it up as we went along.  That approach applied to my leadership role as well.

September 11, 2001, changed all of our lives.  Safety, courage, fear, and fearlessness took on a whole new meaning.  It also ramped up the level of intensity to be an unwavering leader, to find a way to manage what was going on internally with how I needed to present myself externally.  As we navigated our way through such a fragile time, it became clear that the best path forward was to take care of what was right before us.  We are still doing this.  Looking around the Seed now, witnessing children learning about healthy food, selling seeds, and preparing to grow their own food in the coming weeks, I know we’re helping the planet and its current inhabitants, one seed and one Seed at a time.