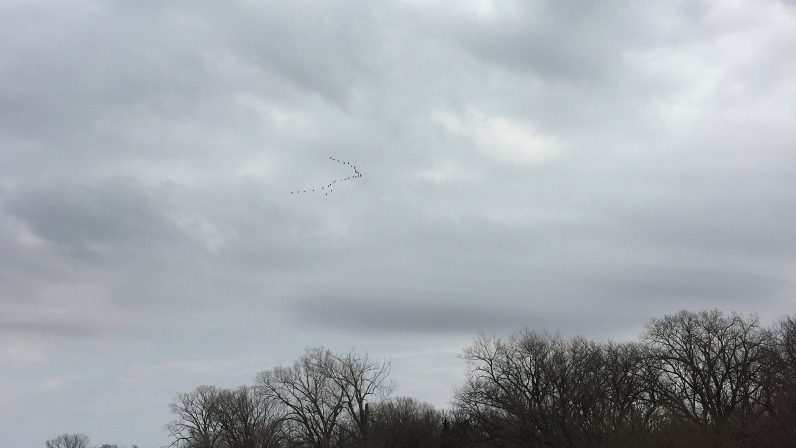 For Anybody and Everybody

It’s impossible for me to see wild geese and not think of Mary Oliver.  High above the Platte River on a wintry Nebraska day or passing through the desert at the change of seasons, the wild geese are poetry in action.  These words at the end of Oliver’s most famous poem, “Wild Geese,” have sustained me through the worst and best of times:

“Whoever you are, no matter how lonely,
the world offers itself to your imagination,
calls to you like the wild geese, harsh and exciting—
over and over announcing your place
in the family of things.”

Last week Mary Oliver died at the age of 83.  Few modern poets have touched lives in the way she did through her lived experience as a writer.  She certainly touched mine.  In conversation with the 3rd and 4th graders, we were discussing her writing.  I shared a few things I’d learned about her from a rare interview in 2015 with Krista Tippett for the On Being Project.  For example, she had a difficult childhood and felt unsafe in her own home.  She often wandered in the woods, skipped school, and always took books and a blank tablet with her.  It was surprising to learn that she was frequently hungry, and part of her reason for being in the forest was to forage for food.  Mary Oliver wrote many poems that, in her opinion, were terrible and belonged in the trash.  She wrote a few that just came to her and she never changed a word.

In the interview, Mary Oliver said, “When you write a poem, you write it for anybody and everybody.”  I smiled when I heard this because just a few days before I was having a conversation with one of the 4th graders.  She was worried that her poem was about an experience only she had, and nobody else would understand what happened.  I smiled when she said this and replied, “Every time you write about one of your adventures, it reminds me of my own childhood.”  Helping young poets understand the universal power of their words is one of the most important parts of my work with them.  We practice writing about something personal or specific that ultimately is about something larger.  This poem written by a 3rd grader about climbing a tree serves as a clear example:

When I Climb Trees

When I climb trees, I feel peace flowing
into my heart, it flows into a river of
mental strength, strength that will
keep me alive,
it will flow down my veins and
up my nerves.  So getting scared is
impossible.

Particularly at this time of year, we talk about the fact that they each have a voice and can continue writing poetry long after they’ve moved on from the Seed.  In our Mary Oliver conversation, I mentioned that toward the end of her life she stopped giving public talks or readings.  As our conversation was winding down, one thoughtful child raised her hand.  I could tell she’d been mulling over her question.  She asked, “When Mary Oliver stopped talking to people, did she still write poetry?”  I paused before answering, then said I was certain she kept writing in some way or another.  My strongest hope for these young poets is that they will do the same.