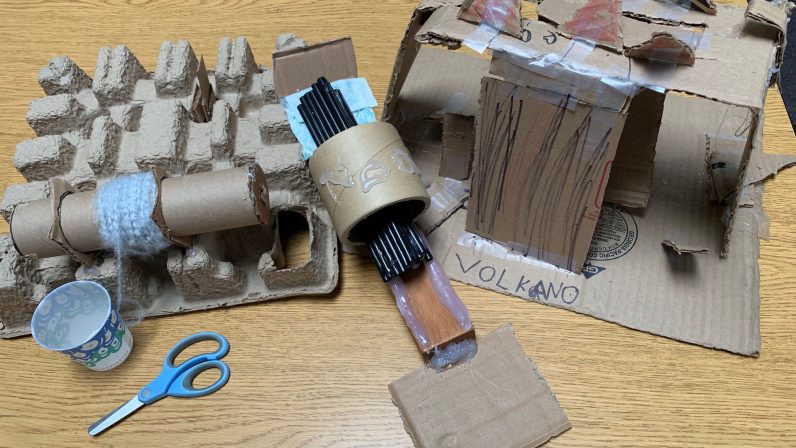 I pay attention to patterns of three.  This week, as graduation photos and announcements started rolling in, a set of three caught my attention: future  engineers.  For decades I’ve held the belief that activities children engage in when they are young often surface in adulthood.  When I heard that three of our former Seeds were planning to pursue or continue studies in engineering, it took me back to my teaching days and the Seed’s everlasting practice of Friday projects in our elementary classrooms.

I don’t actually remember when projects officially started at the Seed, but it’s been at least a thirty year practice.  Basically it involves collecting a large quantity of recycled materials, providing tools and equipment like sewing machines, hot glue guns, packing tape, and scraps of just about anything, then giving students space and time to create.  Projects are completely student-driven and often extend beyond a single work period.  As a teacher, one of the things I most loved about projects is the way children play off of each other’s ideas.  It is common for a child to keep thinking about a project over a long period of time, revising ideas as they come along.  Projects help promote critical thinking, innovation, creativity, and problem solving.

During a poetry brainstorming session last year we generated a list of students’ thoughts about projects.  Here are some of their reflections:

What stood out from this list is the children’s appreciation of the freedom they had to make whatever they wanted.  They liked not being assigned to make anything, to follow their own creative interests.   They offered a glimpse into their passion for projects when they described “grabbing to get one-of-a-kind items” and “impatiently waiting for the hot glue guns to heat up.”

When I visited the 3rd/4th grade class to photograph whatever projects were on their shelves, I found several items, including a cardboard volcano and some sort of device with a cup attached to a piece of yarn that wrapped around a tube.  The creator of the device asked me what I was doing, then proceeded to explain what he made.  It was a game where players have to drop a marble into the cup as it is being reeled in.  I could tell he’d put some thought into it and most likely had a few revisions in mind.   It won’t be long before this innovator will be a college student pursuing even bigger ideas.

In case you’re interested in following up on former students who once upon a time constructed cardboard projects at the Seed, check out this link about Ben Shindel who was the Outstanding Graduate, Spring 2019 at ASU’s Ira Fulton Schools of Engineering.  Or take a few minutes to read our Seed alumni board to learn about other students who have thrived at the Seed and gone on to become curious, innovative thinkers and makers.  Cultivating human beings who have a commitment to furthering the quality of life on Planet Earth is one of the Seed’s primary intentions.  So far it looks like we’re doing pretty well.