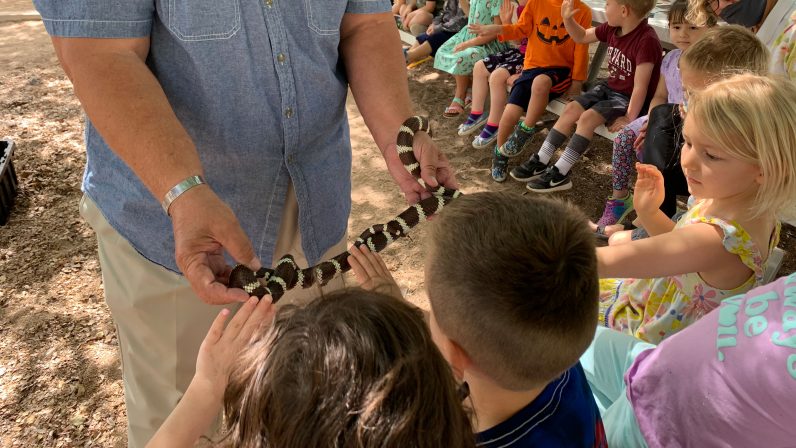 It was a wildlife day at the Seed.  The morning began with the arrival of Winston, a staff member’s rabbit, who came to visit the toddler playground. He was quite popular with both toddlers and older students as he settled into his makeshift environment. As if that wasn’t enough excitement, the grandfather of two students showed up later on with three snakes (each in a pillowcase) and a small rainforest tortoise that he had access to through the Phoenix Herpetological Society.

One by one, he removed each snake from its case, and began telling the students what type of snake it was.  He included information such as what it eats, if it’s  venomous, and interesting facts about coloring and how the type of snake got its name.  Children were invited to ask questions, then the next snake was revealed.  The collection included a gopher snake, a corn snake, and a king snake.  A rosy boa was supposed to make an appearance, but it was in the initial stages of shedding its skin, and not a good time to be in the presence of children.

It’s always revealing when children have a chance to ask questions.  Many of them actually just want to tell a story or make a comment, although occasionally a really great question will come up.  One five-year-old raised her hand and asked, “Does it get its color from what it eats or was it born that way?”  As it turns out, she was making a connection between the snake’s coloring and recent information about flamingos.  Another student who is a snake expert waited patiently to share one of his snake facts.  When his turn came along, he stood up and exclaimed, “I just LOVE snakes!”

Once the preschool group was finished, older students gathered for their turn to learn about the snakes and tortoise.  The entire event was so uplifting for the kids and staff.   It was one of the first events that involved someone beyond our staff coming in to give a presentation to the children.  With the exception of the very youngest classes, it ended up being an event that included all of our older students.  The grandfather was not only skilled with the creatures; he was outstanding with the children, too.  He managed the crowd smoothly (no small feat for even a seasoned teacher),  paced his presentation in a way that kept their attention, and gave appropriate opportunities for answering and asking questions.  One surprising detail to learn was that his grandson, who assisted him like a pro by holding the snakes, had never actually held a snake.

It was a beautiful day weather-wise, and every class was outside enjoying it at one point or another.  The snake visit filled me with extra gratitude, that we were finally able to start opening up our little bubble to hold this event in a safe, inclusive way.  It’s been a year of immense limitations, and I know we’ll need to keep up most of our protocols well into summer, and perhaps the fall.  Having a day like we had with a grandpa and the snakes was uplifting, and it gave us a much needed boost.  It was a glimpse of the possibilities that lie ahead if we remain patient and vigilant.