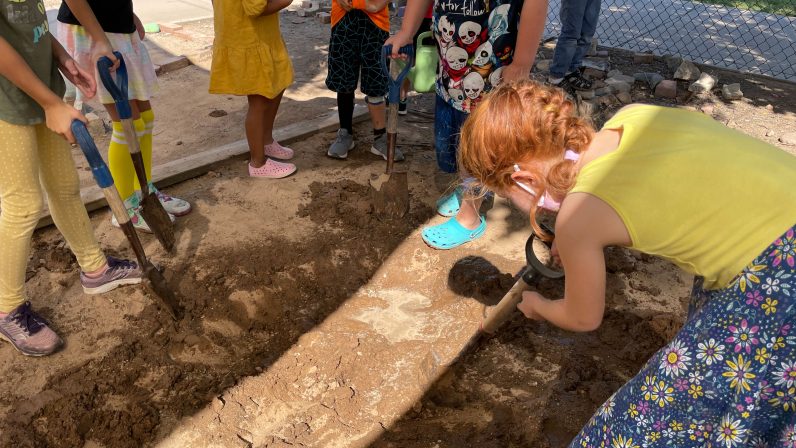 There was a bit of a commotion on Thursday in the 1st/2nd grade outdoor area.  With the weather cooling, there’s been considerably more activity outdoors.  The commotion was the construction of a “swimming pool” for their outdoor classroom.  It involved several shovels, numerous project managers, watering cans full of water, and lots of mud.  No doubt, it’s a project that will be under construction for awhile.  As the pool project grows, so will the community that is building it.

Our Seed community grew a bit more in another way on Tuesday when we held our first grandparents meeting of this school year.  Like last year, we met on Zoom.  The positive side of a virtual meeting is that grandparents from different parts of the country can attend.  We had grandparents from Chicago, Cincinnati, and Iowa, in addition to a few locals.  I generally like to structure the meetings a bit, with a few questions or ideas to reflect upon together.

After introducing ourselves, we each shared how the pandemic has affected us as grandparents.  One grandmother mentioned that she was concerned about her grandkids getting the virus, and she just wanted them to be safe.  Another grandmother said, “Just like Zion’s grandma, I wanted my grandchildren to be safe.”  She went on to say that she was concerned, especially since her daughter was a health worker with more potential exposure to Covid-19 than most people.  An additional grandmother had similar concerns about her daughter also being in the health care field.  Several participants mentioned that they hadn’t been able to be around their grandkids at all, and others were part of their grandchild’s primary care circle.

For the grandparents who lived far away from their grandchildren, Zoom meetings were key to a continuous relationship with their families.  This helped them develop stronger Zoom skills, and a few shared some of the virtual things they did with their grandkids.  Some spent most of their time just talking, and some incorporated books in their sessions.  We decided the topic for our next meeting would be on things to do with our grandchildren, virtually and in person.

We discussed new practices or skills that developed during the pandemic.  One of the grandmothers told us that she wrote a book!  A grandpa said he and his wife spent time daily taking walks, which they have continued.  I loved how he described their close observations of plants.  He said they learned to notice the small things, and were able to see even daily changes in some plants.

One statement from a grandparent that stuck with me was this:  “I found out that things can be cancelled without warning.”  I think all of us felt this in some way.  Personally, I feel like my relationship with change has shifted.  I’ve learned to be prepared for anything, and receive what comes along as the next experience.

The meeting left me with a sense of hope and gratitude for their grandchildren, and for all of us, really.  Knowing our students are surrounded by such loving, devoted grandparents adds energy to our work, and strengthens our Seed community.  These days we need all the help we can get.