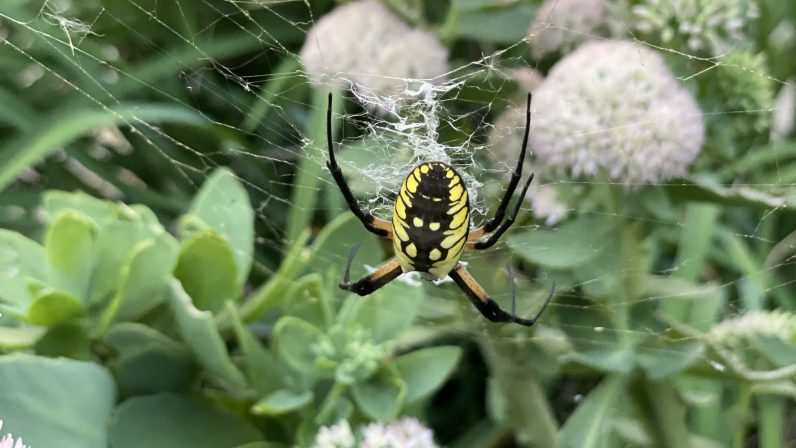 I spent last week in the small town in Nebraska where I grew up.  Although the days were warm, autumn was in the air.  None of the trees were turning colors yet, and the greenery in front of my parents’ house was plentiful.  Near the driveway was a plant that had poofy white flowers that looked like cotton balls.  They were a magnet for dozens of bumble bees.  Additionally, right in the middle was a sticky web with a stunning spider attached.  Although it had a frightening appearance at first, I learned that it was a common yellow garden spider, argiope aurantia.  For the entire week, each time I walked by I stopped to observe it.  Life on the web changed daily.

The spider moved from one side of the web to the other.  One day I noticed two bumble bees entangled in the sticky threads; it appeared that they’d be on the spider’s menu shortly.  The last day I observed the spider grasping onto and consuming a large moth also stuck to the web.  When I mentioned the spider to my brother, he said he’d seen it the week before, and when I told my daughter about it, she said she noticed it in July.  This made me curious, so I did some research.  The males can last up to a year, usually dying after mating.  The females, on the other hand, sometimes live for several years, depending on factors like cold weather.  It’s hard to imagine a creature so small and seemingly fragile (no fur to fight off freezing temperatures) surviving that long.

I’m not sure what it was about the spider that captured my attention.  Obviously, it was a constant threat to the bumble bees, but this didn’t deter their steady presence nearby.  More than anything, the web and surroundings of argiope aurantia were a metaphor for the cycle of life.  There was interconnection between different species, each playing a role in the other’s life.  There was both danger and trust.  Life went on because of, and in spite of, their relationships.  In the end, maybe that’s what caught my attention.

As a planet, we’re in that place, living like the bumble bees in and around forces that threaten our very existence.  Yet we each keep moving forward, following our own path to take care of personal needs for survival.  The part I still struggle with is the gain of one species at the expense of another.  I know it’s the way things are in the naturally occurring web of life.  It’s when this kind of mentality seeps into human lives, however, that I know I still have much work to do in the world. I am one person, and the change required is vast.  On days like today I remind myself that the transformation needed will happen one conversation, one blog, one act of kindness at a time.  It will happen with persistence, in the same way argiope aurantia steadily approaches each new day.