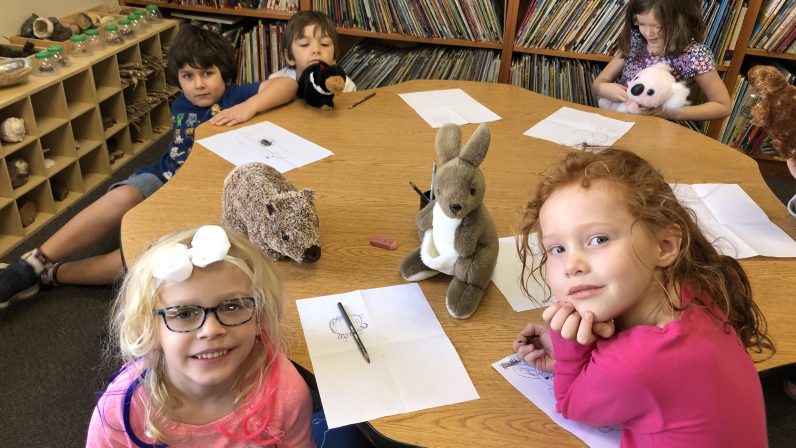 A few days ago I read a plea for help posted on Facebook by one of our Seed alums. She’s living in Australia.  Her post included a stunning photo of a huge plume of smoke and an article describing the fire as big as Manhattan.  I thought about her post all weekend and decided we should do something as a school to help out.  I hadn’t yet mentioned this idea to anyone, and as it turned out I didn’t need to.

I walked into the K-1 class for my usual Wednesday writing session and noticed an enthusiastic, articulate girl standing by the teacher talking about something.  On the table behind her were several stuffed animals, including a kangaroo, koala, platypus, Tasmanian Devil, wombat, and crocodile.  Remembering that her father is from Australia and has family there, I put the pieces together before anyone filled me in.  When there was a break in the conversation, I told the class that I’d been thinking we should do something to help those affected by the Australian fires. They told me that they were especially concerned about the animals.

Being a card maker, I suggested having the kids draw animals and water color them, then put them on cards to sell.  As it turned out, they’d already drawn pictures of the stuffed animals, which were ready to be photocopied and painted. They had already brainstormed other ideas to help raise money. Before I left the room I learned that plans are underway for a study of the animals in addition to the fundraising projects.  The emergent curriculum is alive and well in 2020 at Awakening Seed.

This part of the year is prime learning time.  Students of all ages make developmental and educational leaps that we don’t see at other times.  They come back from winter break refreshed and ready to learn.  In a sense, they’re on fire with enthusiasm and openness for absorbing new material.  In addition to their cognitive learning, it’s an important time to learn more about being a good human being.  Community service has always been a part of our Seed curriculum, and our students in the coming weeks will have an opportunity to participate first hand.  Even though we are on the opposite side of the Pacific Ocean from Australia, our students will come to understand that they can make a difference, even from far away.

For more information about the Australian fire support efforts, check out this link.