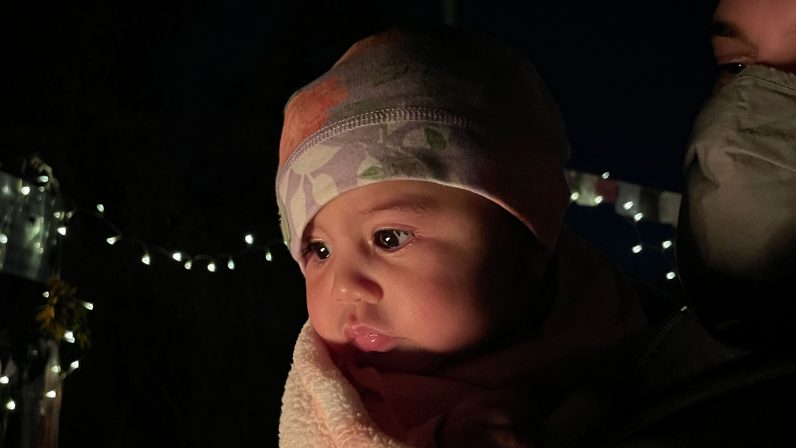 A Night of Wonder and Light

I knew last night was going to be extraordinary.  I just didn’t realize how extraordinary.  There was a moment right before it started that revealed a glimpse of how it might be.  It was dusk and the sky was the purplish color of twilight.  Staff members moved about quickly lighting the 600 luminarias we made, which would be a source of light throughout the next two hours.  It was a moment of blending human lights with that of tiny candles.

At 5:30 our first families and community members began arriving.  I was stationed out in Gwen’s Castle the entire evening.  I loved greeting the steady flow of humans who showed up at the Castle after viewing the creative art displays by our talented students and teachers.  Most were current Seed families, many of them new to the school since the pandemic began.  Universally, there was a sense of awe, surprise, and deep appreciation.  Although there was some lamenting by a few  parents of our oldest students that they’d never see their children perform again in a Seed winter solstice celebration, even they were touched by the spectacular quality of the evening.  The shift to our new tradition seemed congruent with where the school is at the present time.

As each family stepped into the space of Gwen’s Castle, I invited them to light a candle in remembrance of someone special in their life.  It was fascinating to see how each family managed lighting their candle, as they included their child in the process.  One by one each candle was lit, and by the end of the evening, the table of candles had nearly melted into one large pool of wax.  After lighting a candle, families added their dedication flags to a collection basket nearby.  The flags, which will eventually be hung in the Castle, were filled with memories of deceased family members, wishes for their present family, and inspiring words of wisdom.  Here are a few that were most touching:

There were many heartfelt moments, especially when Gwen’s family arrived to pay tribute to their daughter and sister.  I felt deep appreciation for this family with whom I’ve shared over a decade of grieving, loss, unbelievable joy, and light.  Gwen’s story is embedded in the Seed’s story and will endure through time.

Toward the end of the night, one sweet family came through.  Their young baby had been crying for much of the time they were there, until she saw the candles.  I caught a glimpse of her quietly mesmerized by the light.  I wondered what she was thinking, what she will be like in a year or two when she’ll likely be running around on our playground.  I was mesmerized by her light.  I felt honored to be a part of something that opens up spaces for the kind of light to be expressed that happened last night.

Today as I was looking through the collection of small flags, I came across one that contained a poem written by one of our former Seed dads, Dave Posten.  Dave was a wonderful dad and husband, and a devoted Seed parent.  His three kids attended the school, and his wife, Pam, was involved in supporting the Seed in numerous ways over several years.  Dave’s grandson, August, is a second generation Seed.   Sadly, Dave died too young, and left a big whole in many lives.  He would have loved last night’s celebration of the winter solstice.  Here’s his poem:

I am certain Dave, Gwen, and many others, past and present, were with us last night.  The love generated by our gathering of lights most certainly touched the bottom of the pond, and the bottom of our hearts as well.