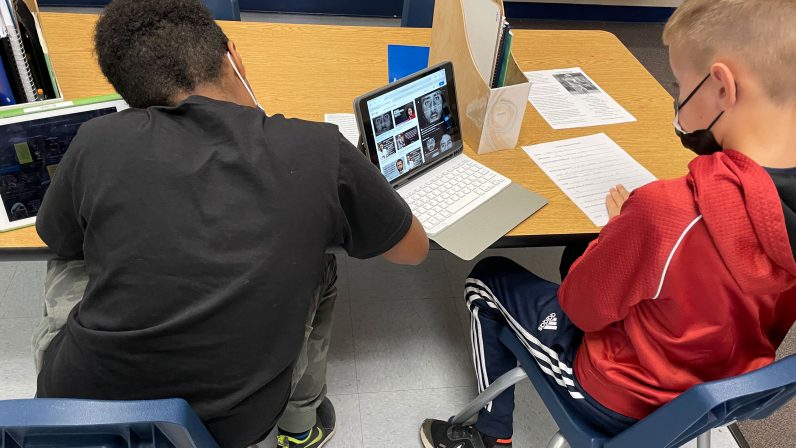 I’ve had the privilege of subbing in the 3rd/4th grade class this week.  It’s familiar territory for me, as I spent quite a few years teaching 4th/5th graders in this same room.  I also know the students as a result of being their writing teacher, some of them for 3-4 years.  One of my favorite parts of teaching is developing studies, so we jumped right in to a study about leadership.  Our starting point was a poem called “Say The Names” by Elizabeth Acevedo.  I’d used the poem with students prior to this year, but wanted to revisit and expand our response.  The poem starts with these lines:

“Say the names
of leaders who came before
and made the world better;

say their names,
so that uttering letters
might lend you courage.”

Using the names listed in the poem, we made our own list of over 30 people we  believed were good leaders.  Among them were artists, presidents, athletes, authors, and social activists.  We composed this list of qualities of a strong leader:

Each child then selected a leader to research.  Once information is gathered, they’ll begin writing a poem about their person.  Additionally, each student will create a piece of art to represent their leader.

As we move through our work, leadership qualities are referred to throughout the day.  Spontaneous incoming learning has helped support our study.  For example, I recently read Tarana Burke’s book, Unbound.  In it she described attending a youth leadership conference that changed her life.  She shared a story of the leader asking the group of teens to raise their hand if they were a leader.  Initially most were reluctant to raise their hands.  Eventually, though, she convinced them that they were ALL leaders, and that’s why they were there.  When I read the passage I thought of the 3rd/4th graders at the Seed.  Gathered on the floor with them on Monday, I reminded them that they are all leaders, that being at the Seed is a course in leadership training.  I told them that their practice as writers helps them develop a stronger voice for leadership.

Toward the end of our conversation, students took a few minutes to write their intentions (how they want to be) for 2022.  A few lines caught my attention.  These words from Riely were confirmation that our leaders in training are alive and well: