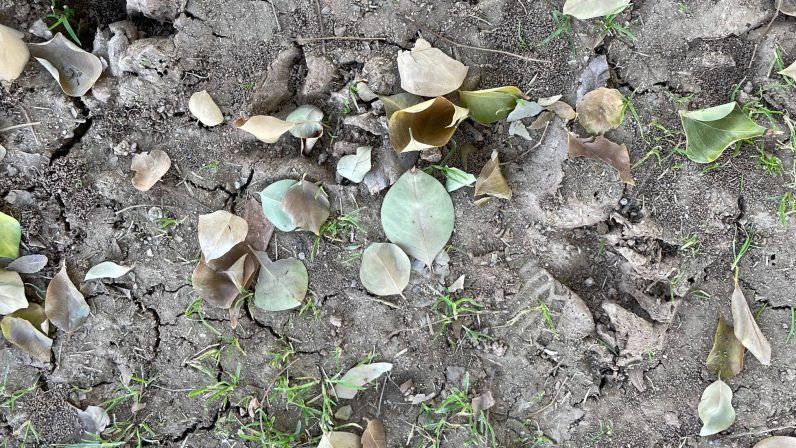 During recess I noticed a child sitting by herself in the grass under a shady tree.  She seemed perfectly happy engaged in her own little world.  I approached her to check in, and was amazed at her willingness to talk.  Keep in mind, this is a child I’ve known for several years, with whom I’ve had few words.  I’ve tried reaching out to her on many occasions, and have always respected her reserved nature.  It was quite a surprise when she opened up.

When I inquired what she was doing, she answered, “I’m sitting here just listening to nature.”  I asked what sounds she heard.  She thought a moment and replied that she heard the sounds of trucks.  I sat with her, looked around and heard birds singing.  When I pointed out that I heard birds, she said she heard them, too, and they were harder to hear.  Then she told me she had some ladybugs at home.  They were in a container and she said she needed to put water in it for the ladybugs.  I asked what she was going to do with them, and she said they were going to release the ladybugs.

Our conversation was interspersed with silence between the different topics.  As we sat under the huge ficus trees, I noticed a gentle breeze moving through the branches. I said, “Sometimes I like to watch the wind blowing through the trees.”  She said they had a ficus tree at home that she liked to climb.  When the branches were bigger, she said her dad might make them a treehouse.  This captured my attention.  “When I was young, I was a girl who loved to climb trees.  I loved treehouses and we had several in our neighborhood.” She looked at me with a sense of appreciation for understanding what it means to be a girl who likes to climb trees.

As our conversation came to an end, we both walked through the dried mud under the ficus trees.  I happened to notice paw prints left in the mud after our last irrigation day.  I pointed them out to her and we shared ideas of what kind of animal it might be.  Given the the long pointy five digits left in the mud (and the animal track chart I consulted on my iPhone), I predicted that they might be raccoon tracks.  It gave us both something to wonder about as we went our separate ways.

That sweet conversation stayed with me the rest of the day.  I hope it did for her, too, and that she felt seen and heard for who she is.  It’s what we want from any conversation with a child, that they feel received and honored in their unique human expression.