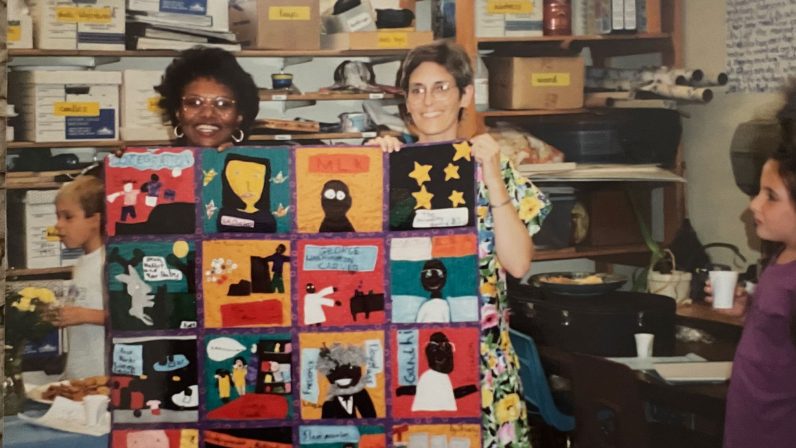 I first met Elsie Moore in the late 1980s, around the time of the Challenger Space Shuttle disaster.  I remember vividly sitting at a low table with Elsie and her husband, Wade.  They were looking for a kindergarten program for their eldest son, Arthur.  She was pregnant with her third son, Allen.  As always, she was beautifully dressed and had a bright smile on her face.  We hit it off immediately, and soon Arthur became a Seed, as did his brothers, Aaron and Allen, when they were eventually old enough.  It was the beginning of a 34-year friendship.

Over the years I knew Elsie as a mother, friend, mentor, storyteller, and sister.  We were close to the same age and grew up in the 50s and 60s.  Although our lives were quite different in many respects, there were parallels due to arriving on the planet around the same time.  Elsie was on the Seed’s board of directors, and I was her two youngest sons’ second grade teacher.

When Allen was in second grade, his dad (Elsie’s husband, Wade), died of cancer.  It was an overwhelmingly sad time, and we wanted to make something for Elsie to lift her spirits and thank her for all she had done for the school.   We made her a beautiful handmade quilt with a social justice theme.  I can still remember Allen holding out the rolled up quilt in both of his arms saying, “Mom, we made this for you.”  Eventually the quilt was chosen as the cover for my book, Making School by Hand.  There was a controversy about the quilt within the organization publishing the book.  There was a misunderstanding about some of the images on the quilt, and clearly the critics didn’t realize that it was made by 7-year-olds cutting felt with kid scissors.  At one point they even flew Elsie to Chicago to discuss the situation.  Letters were written and published (including one by Elsie and two of her sons), and it was a painful but important learning experience for me.  In the end, I asked that the cover be changed because I didn’t want my students’ art to be misinterpreted.  Elsie always stood by me as an educator, which had a long lasting impact on my career.

At some point, Elsie started coming to school to tell her stories of growing up in rural Virginia.  One was about holding hands at age four with a little white girl in a country store.  She described how the adults yelled at her, worried that they’d be in trouble and lose their jobs.  It was years before she understood what had happened.  The rest of her stories were about high school, including having food thrown at her in the cafeteria. When she reported the incident to the principal, he insisted that she did it to herself.  She told us about spending the lunch period studying in an empty classroom (instead of going to the cafeteria), eating crackers for lunch, by herself and then later with one person who was friendly when it was just the two of them.  The most heartbreaking of her stories was when she told us about being denied the annual scholarship given to the valedictorian.  At a time when her father had recently died, and she desperately needed scholarship funds, she was given a subscription to Readers Digest.

Over the years, even after her sons graduated from the Seed and moved on to other schools, our lives continued to intersect.  We saw each other a couple times a year, and it was always heartwarming to reconnect.  Elsie often referred to me as her sister, and I certainly felt that way about her.  One of the most generous gifts she gave me was permission to visit her childhood home in Virginia a few years ago.  We’d heard stories about Winnie’s Hill for decades, and I wanted to experience it first hand. Sitting there on the front porch, my appreciation for Elsie deepened.  I thought about the trajectories of our two lives, and felt gratitude for our sisterhood.

On February 21, in the early morning, Elsie slipped away from this world.  It will be awhile before my heart fully receives the implications of this transition.  I’ll continue to do what she’d want me to do, keep showing up to do my work at the Seed, going after the dreams that originally brought our lives together.

We were girls with dreams, beckoned to the world
beyond by starry summer nights.  Though our

ancestral homes were far apart, the tucked-away
places where we each grew up were not so different,

really.  I don’t know what it was that called us
elsewhere, though we both responded by making

lives that changed lives.  Sitting on the front steps of
your family home, a soft July rain starting to fall,

your Winnie’s Hill stories were right there with me,
stories that have shaped my life in ways that elude

description.  It felt like home, being there on the land
where you played, imagined, lost your father, and

stepped into your courage.  Sister, you inspire me to
continue stepping into my own, to keep on dreaming.