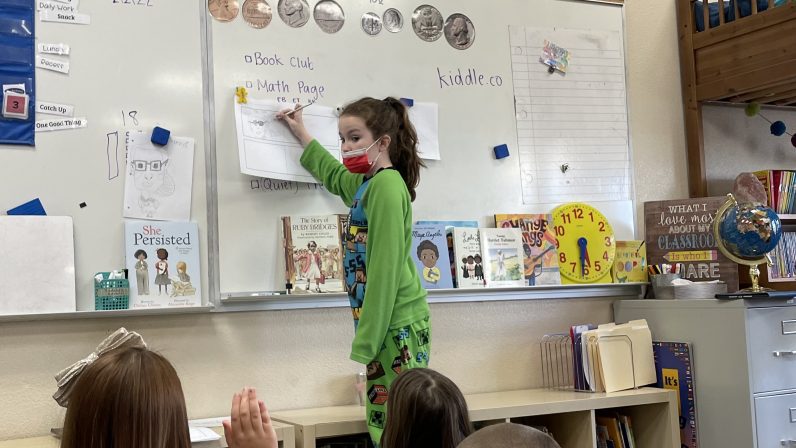 As you might recall, a few weeks ago during my stint of substitute teaching in the 3rd/4th grade class, we embarked on a study of leaders.  Students selected someone they wanted to learn more about, researched important facts about his/her life, drew a portrait using oil pastels, wrote a poem, and found a quote from their person.  A few students also drew comics about something related to their leader.  Kenzie, one of the 4th graders, has a reputation (and talent) for drawing characters and comics, so we called on her for assistance with another project.

The 1st/2nd graders recently began their own study of change makers.  In writing we’ve been learning how to tell a story through comics, and have been practicing drawing short imaginative pieces.  When they started the change maker study, their teacher and I decided it might be fun for them to illustrate their person’s life through drawing a comic.  Although I was marginally successful demonstrating how to make a comic, we needed an expert.  Kenzie immediately popped into my mind.  She was excited at the prospect of being a teacher.  Today she made her debut.

We started out the session by having her talk a bit about her selected leader, Ruth Bader Ginsberg.  She shared the poem she’d written and explained a few details of RBG’s life, including that she grew up in New York in a low income, working class neighborhood.  She described how hard RGB had to study, that she was a law school teacher, and she stood up for women’s rights.  The first phase of the  conversation concluded with a brief inclusion of the fact that RBG was one of only a few women who served as a justice on the Supreme Court.

Then Kenzie began her most excellent demonstration of how to draw a comic.  She drew four sections on her drawing sheet, and quickly went about illustrating each chosen aspect of RBG’s life.  As she drew, she fielded questions about her process.  The 1st/2nd graders had many questions, and a few comments.  By the time our session came to a close, she had a beginning draft for each section, with the promise to return to the group once she completed her comic.  After a round of applause, she returned to her own class, and the 1st/2nd graders enthusiastically got to work.  Across the board, they each jumped into their work of beginning to draw their change maker and her/his life story.  Receiving such a powerful boost from a peer was just what they needed as inspiration to make their best work.  It was truly an experience with a change maker up close and personal.