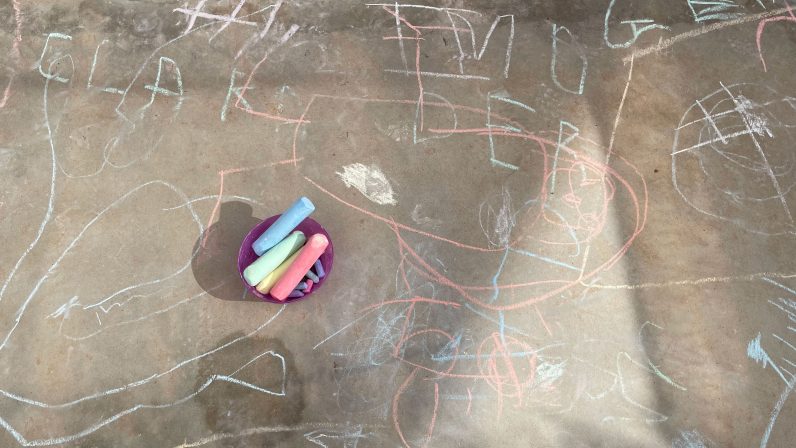 A Fluttering of Writers

This morning I walked into school with one of our first graders.  Yesterday we sat together and I helped her decipher what she’d written about her family dog.  The words were mostly strung together and it was hard for her to remember what she wrote.  Eventually we sorted it out as I had her tell me what she wanted to say, and I wrote it down.  This morning she told me she covered up what she did wrong yesterday and finished her poem.  I said, “You didn’t do anything wrong.  What you wrote is called a first draft.  Poetry takes a lot of practice and each time you try is another draft.”  This is the level of work happening with young poets these days.

Elsewhere in the school younger emerging writers are filling the sidewalk in their outdoor area with chalk lines and letters.  One four-year-old patiently spells out her name and the names of her friends.  The preschoolers’ practice with letter formation is actualizing results.  It’s the time of year when many parts of our work come to fruition.

As part of our poetry writing studies, I read Georgia Heard’s poem,  “A Quivering of Wings,” to the two oldest classes.  The poem uses the metaphor of a butterfly to express the way poems can hover around us, trying to grab our attention until we write them down.  Here are the last few lines of the poem:

After we read the poem, one of the 2nd graders said, “The poem reminds me of a mystical, magical Phoenix bird.”  She went on to explain how the poems we write often seem to take us through a transition like that of a Phoenix bird being birthed from the ashes.  One of her classmates said the poem made her feel calm and “if you’re scared, it embraces you.”  While discussing it with the 3rd/4th graders, I thought of how far they’ve come in their path as writers.  Later I reread the last few lines of Georgia’s poem.  They are also “small butterflies raised, watched, let loose into the world.”  They haven’t quite reached their release day yet, but it won’t be long.  Everything we do holds the intention of preparing them for what will come next in their lives.  Yet each year, it’s one of the most bittersweet parts of my Seed life.

Author Susan Cain, has recently written a new book, Bittersweet, in which “she sets out to explore the idea that ‘light and dark, birth and death — bitter and sweet — are forever paired.”  The experience of cultivating young poets is certainly filled with both bitter and sweet moments.  The sadness of having to let go of them after all our time learning together, is far outweighed by knowing that the world is about to receive an incredible group of writers ready to share their voices and light.