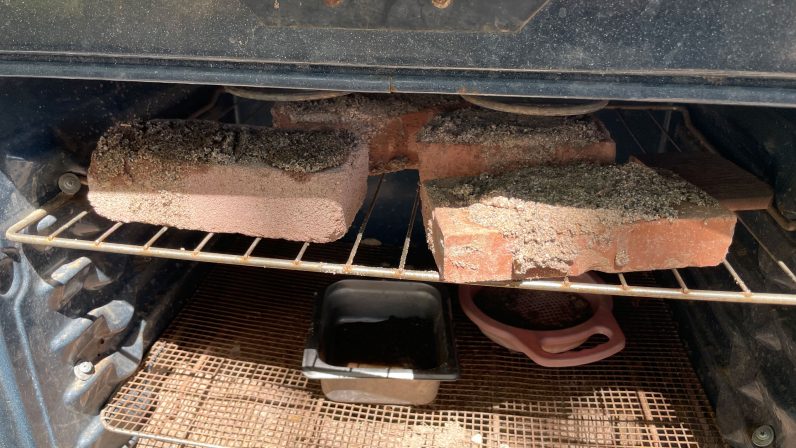 Bricks in the Oven

Life on the playground is a constant dance of balancing creativity, exploration, and imagination with plain old safety measures.  We look at it as a fluid process of measuring affordable risks.  We let children (except toddlers) play with sticks and bricks.  Yes, we encourage them to walk when they have sticks in their hands, and they’re not allowed to use them as pretend or actual weapons.  We attempt to keep the majority of the sticks in Gwen’s Castle, but some do find their way to other parts of the playground.  Similarly, we try to keep bricks in the building area, as well as the bigger rocks.

Yesterday a bunch of rocks had been moved into the sand area, and a few of us decided to move them back to their designated location.  When this task was nearly completed, I happened to glance in the large oven in our pretend outdoor kitchen, and noticed several bricks carefully slathered with sand in the oven.  Appreciating the imaginative thinking that went into the placement of the bricks, I left them to “bake.”  Some acts of creativity warrant an exception to the rule.  Discoveries such as the baking bricks send a clear message about the vast opportunities our Seed playground provides children.

This time of year, in particular, is full of invitations for creativity on our playground.  One of the most significant areas is Gwen’s Castle.  The Castle is a part of the playground that was dedicated in 2011 as a memorial to Gwen Van Kirk, a young Seed student who sadly died in her sleep at home when she was four years old.  We worked with Gwen’s family to establish the space where children could use their imaginations and creativity in a natural environment.  In the last eleven years, our students have enjoyed the space for building, climbing trees, and creating spaces for play.  I don’t know of many schools in our area that give children a chance to explore in this way.  One aspect that I love most is how often this kind of play involves children across different age groups.  On many occasions, I have come to see and appreciate a child in a way that wasn’t available before.  There is something magical in the way children come alive when they have a chance to overcome fear by climbing a tree or feel success from having moved heavy logs to create a fort.  Obviously, we place the safety and well-being of our students at the forefront of all we do.  Within that, we believe there is also space for children to take risks and try new things, especially in the beautiful outdoor environment that has been cultivated here for them in the last two decades.