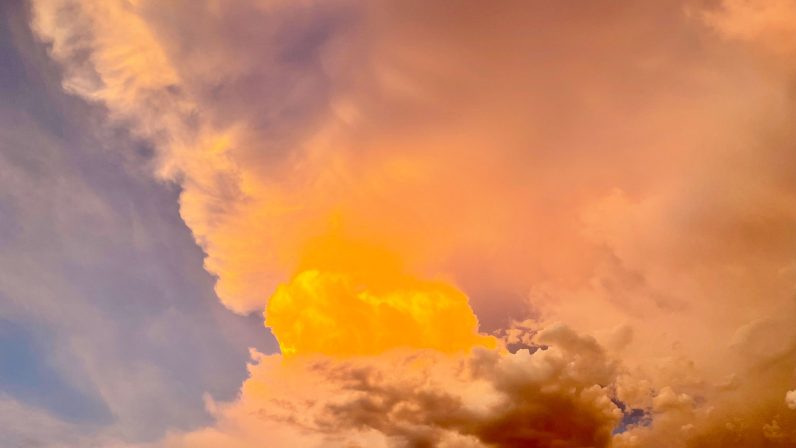 Be and Be Better

I know it’s unbearably hot this time of year, as sweat becomes a natural state of being.  That said, I love the storms and cloud formations that appear during July in Phoenix.  Last night the clouds were unusually mesmerizing, and I’m glad I captured a few views before the light changed.  As I continued my walk, with a dust storm rapidly moving over South Mountain, making the mountain invisible, I felt a sense of peace, even though I’ve been feeling tired lately, overwhelmed with the world, and ready for a couple weeks of vacation.  It was a fleeting moment of peace, and one I need to hang on to in the coming days.

Recently the creators of On Being, a podcast that has significantly influenced my life in the last nine years, have decided to end their weekly radio show and shift directions with the podcast.  When I first heard of this change, I felt somewhat disoriented and sad.  On Being has had a grounding effect on the way I’ve navigated the world, inside and out.  I’ve relied on it for spiritual inspiration, introduction to the minds and hearts of poets, and glimpses into the worlds of scientists, thought leaders, and social justice advocates.  The most profound episode was Krista Tippett’s conversation with the late poet-philosopher, John O’Donohue, recorded just months before he suddenly died in his sleep at the age of 52.  That interview with John inspired a trip to Ireland, where we visited many of the places he talked about.  Visiting his humble gravesite and standing in the same small space at Corcomroe Abbey where he led Easter sunrise masses as a Catholic priest, had a lasting influence on my approach to life.  My relationship to the natural world has never been the same.

Another interview that confirmed my commitment to keep writing, especially about the environment and social justice, was the session with the late poet, Mary Oliver.  The way she trained her mind and heart to see the world and then find words to express her observations, has shaped the course of my writing life considerably.  More than anything, Mary Oliver’s poem “Wild Geese,”  read in her own voice, gives me permission to not be so hard on myself, to remember my “place in the family of things.”

One of the main reasons for On Being’s decision to end their work as it has been, is to take a pause, to create a space in which new ideas can come forth.  I fully support this way of working, and hope the next two weeks will provide a similar space for me, and for our staff.  Under normal circumstances, the work we do at the Seed requires intense focus and energy.  The added pandemic layer has amplified what is expected of us on a daily basis.  We have significant work ahead of us, particularly in the area of social justice.  As one of the school leaders, I want to be the best I can be to move that work forward.  I’m counting on the upcoming break to bring renewed energy.  In “When Great Trees Fall,” Maya Angelou writes:

“And when great souls die,
after a period peace blooms,
slowly and always
irregularly. Spaces fill
with a kind of
soothing electric vibration.

Our senses, restored, never
to be the same, whisper to us.

My intention for the days ahead, during which I can just be, is that the time will open a new way in which I can be better.