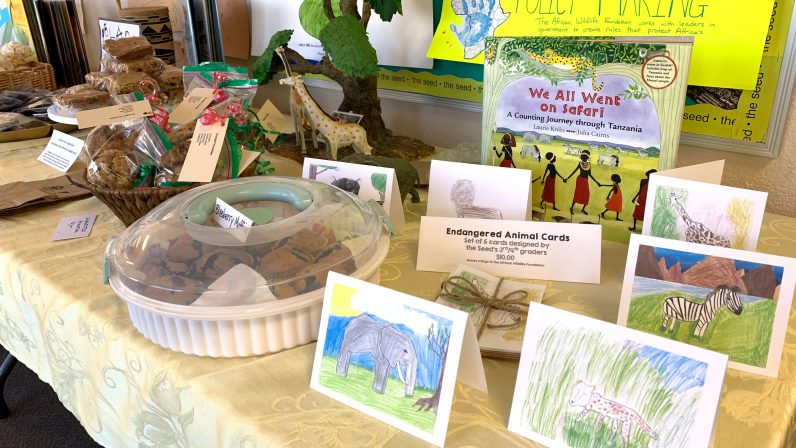 Teamwork for a Cause

Last week I described potential plans and activities happening on and around Earth Day at the Seed.  One project in particular took on a life of its own.  The Preschool 4s’ campaign to help the African Wildlife Foundation has become a school-wide effort, thanks to the generosity of parents, as well as their baking talents.  Other classes have gotten in on the campaign, and individual children have dropped their own coins into the money jar.  It’s become a community venture.

Throughout the week the assortment of treats on the table has expanded.  A couple batches of zebra cake have appeared and been consumed.  A plate of black panther cookies with a sign advertising them has also been available to customers.  As additional treat options have been requested, the team has done its best to respond.

The 3rd and 4th graders stepped up their teamwork by creating beautiful posters with hand drawn animals to explain the African Wildlife Foundation’s scope.  Their posters have helped draw attention to the project.  The detailed drawings they made of African wildlife were scanned and made into card sets. The display and products on sale represent both the preschool and elementary perspective on the wildlife situation in Africa.

Two of the preschoolers made a decision to donate their own money to the cause.  After one child added his funds to the collection jar while friends looked on, it inspired another classmate to do the same.  The seeds of generosity are being introduced to preschoolers in a way that helps them begin to see that, even at a young age, they can make a difference.

The online campaign to aid the African Wildlife Foundation has also been intentionally supported by parents and grandparents, as well as community friends.  In addition to baking and help with sales, at the time of this writing the original goal of $1,000 has been surpassed with a total of $1,536.  We have been told there will be matching funds, which could take the total well over $3,000.  Not a meager outcome from a group of preschoolers and their generous village.